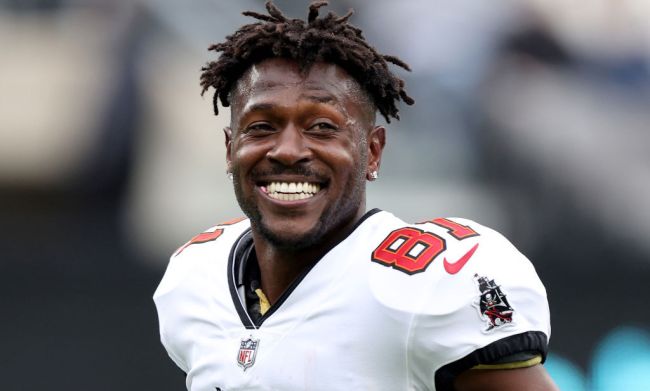 As the Tampa Bay Buccaneers gear up to begin their defense of their Super Bowl title against the Philadelphia Eagles this weekend, their former wide receiver Antonio Brown has been popping up everywhere else: from Brooklyn Nets games to podcast appearances to releasing a new rap song to grabbing a bite to eat with Kanye West. Take a second to imagine what those conversations must be like.

While Brown was heading into Los Angeles restaurant Craig’s to meet up with Kanye, the former Pittsburgh Steelers, Oakland Raiders, New England Patriots, and Tampa Bay Bucs star was hounded down by TMZ, who actually got Brown to essentially admit he took things too far when he ripped off his shirt and pads before exiting the game against the New York Jets.

“It probably wasn’t necessary or professional,” Brown said of the moment, perhaps now finally realizing that he might have ended his own career with the outburst.

In the days following the incident, Brown made some serious allegations about the Bucs and head coach Bruce Arians, claiming they were trying to force him to play hurt. The Bucs and Arians have since disputed those claims.

The Bucs, who were already entering the postseason without the services of wide receiver Chris Godwin, will now have to reclaim their Super Bowl title without AB’s help as well. The #2 seed in the NFC, the Bucs will take on Jalen Hurts and the Philadelphia Eagles at Raymond James Stadium in Tampa on Sunday, January 16, at 1 p.m.