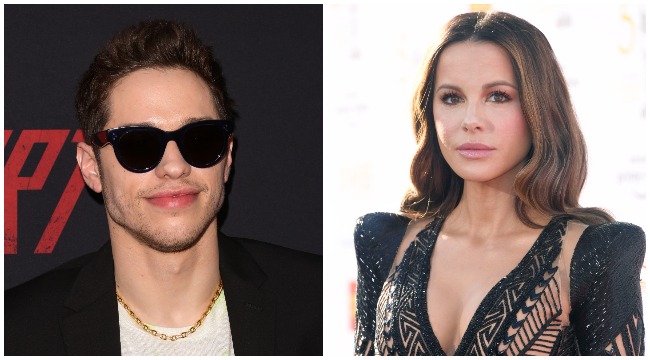 At the time of me writing this, Pete Davidson is probably slapping skins with Gisele Bundchen while Tom Brady sheepishly watches in the corner of the room. It’s not cheating. It’s the Pete Davidson effect. It defies logic or science.

Davidson is yet again freed up to work his magic on another Hollywood untouchable after it’s been reported that the 25-year-old comedian and every straight man born in the 80s Hollywood crush have broken up.

“Pete and Kate have pumped the brakes on their relationship,” a source tells Us Weekly. “They are still spending time together but it’s less serious: more friendly of a vibe and less romantic.”

The pair’s relationship began after the new year when they were spotted getting handsy at several Golden Globes afterparties.

It wasn’t long before they nearly copped themselves an indecent exposure citation after having a PG-13 makeout session at a Rangers game. Actually, it was more like a stomach evacuation than a makeout sesh, just ask the guy who narrowly missed getting fluids on his jacket.

A source close to the relationship told Page Six that age wasn’t an issue, but Davidson’s lifestyle was.

“Even though Kate has been in Hollywood for a long time, she struggled with the attention on her relationship with Pete. He lives his life with his heart on his sleeve.”

In an interview with the the Los Angeles Timesin March, Beckinsale admitted that she had “never dated anybody who comes with their own bag of mischief.”

The two were dating for five months.

Who’s next for Davidson? Here are my five best guesses.

Olivia Culpo — Recently split with Danny Amendola and has since been spotted with DJ Zedd. Relationships with DJs? Wait till nightfall, Pete, that relationship will be a thing of the past.

Charlize Theron —  “I’ve been single for 10 years, it’s not a long shot. Somebody just needs to grow a pair and step up. I’m shockingly available.” Maybe a bit too easy.

Lena Dunham — Don’t put it past Davidson. There’s evidently nothing he can’t do.