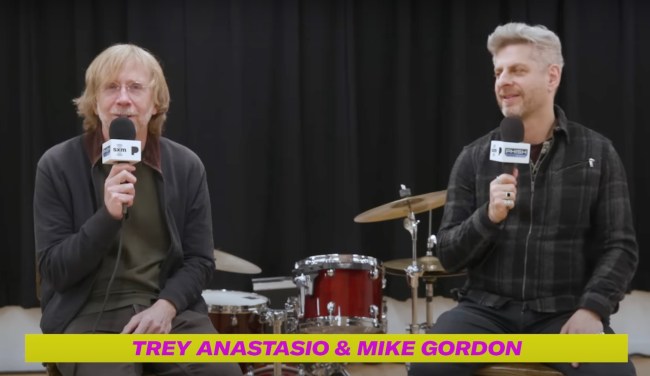 As an unabashed Phish nerd, one of my favorite Internet videos of all time is “Phish Shreds IT“, aka “what Phish sounds like to people who don’t like Phish.” The video mocks the bizarre world of Phish and how it’s perceived by outsiders.

It hits the nail on the head on the idea of music and perception: What sounds like an improvisational magnum opus to the Phish faithful – complete with sublime sonic textures and funky soundscapes – is just a bunch of noodling and noises to someone else.

See, the world of Phish is weird. Accept it. Embrace it.

Last night, for example, I drove three hours from Columbus, Ohio to Deer Creek after a bachelor party to stand on a hill in the middle of a cornfield. At the show, I proceeded to have my world rocked off my orbit by a 35-minute version of “Sand”.

It rocked. So many high fives were given out to friends.

I can’t think of a better way to spend my time or money.

Trey Anastasio and Mike Gordon from Phish recently sat down with SiriusXM to play a game called Reverse The Verse. They listen to an iconic Phish song played backward and try to guess what song it is.

Clearly amused by the game, Trey comments: “It’s much better than any of our forward songs.”

Trey nails the second song right away: “Down With Disease.”

Trey proceeds to explain how the band thought their studio was going to burn down while recording the 1994 album Hoist in Los Angeles. Mike continues with a story about watching Allison Krauss at The Troubador and being blown away by her voice. They invited her to sing on the album at a studio session, resulting in the song “If I Could.”

As they recall, the guys in Phish were blown away by her singing on the first take. Allison Krauss, however, was her own harshest critic.

Without giving it away, Trey and Mike continue with more Phish songs in reverse. They win some, they lose some.

Now I just hope we get a Phish song played backward in full someday. Experimentation, after all, is what this band does best.

There’s a good chance that it would sound like… a universally beloved Phish song.