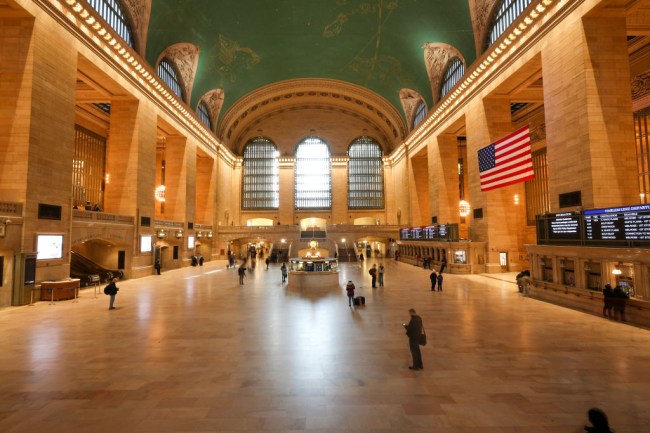 While New York City hasn’t adopted any sort of ‘shelter in place’ edict like San Francisco has, it has shut down public schools, movie theatres and gyms as well as placed restrictions on bars and restaurants limiting them only to take-out and delivery.

With these restrictions and the numbers of confirmed cases continuing to grow in New York and New Jersey, the entire city has turned into a ghost town as people continue to work from home and stay inside.

Photos of just how empty some of the most popular places around the city, particularly in Manhattan, have been going viral. Some of the places are almost unrecognizable due to the crowds being so small.

The lights are still on, but nobody is there. I personally think Times Square is the worst place on the planet, but I bet it’s actually kind of nice without four million people standing around you and guys dressed up as Elmo trying to hustle you for a dollar.

In my 15 years walking through #TimesSquare in the early morning I’ve never seen it like this. No people- No cars #coronavirus pic.twitter.com/N4YVZHxqQ4

Crazy. Having only moved here 5 years ago, I haven't seen Times Square this empty on a nice day. This was 9AM Monday morning. #nycshutdown #CoronavirusOutbreak pic.twitter.com/yI4Lmhj1j6

It’s incredible, and also frightening, to see exactly two people at any subway stop in New York City at any given time, but that’s exactly what this picture shows.

Subway was kind of a ghost town at 4PM and 8:30PM. Also, the shiniest subway seats ever pic.twitter.com/jJdrmG99RU

The High Line in Chelsea

The walking path has officially been closed recently to improve social distancing efforts. It’s usually covered up with people trying to capture the perfect Instagram photo. It’s one of the coolest spots in the city when it’s not overly crowded, but nobody will be enjoying the walk in the near future.

I’ve never seen the High Line so empty. All shutdown. No people watching while I WFH. #nycshutdown pic.twitter.com/uqCy90K4Jf

These may be the craziest photos of all. For anyone that’s ever been to Grand Central Station, you know just how wild and crazy this place usually is at all hours of the day. It also looks extremely clean, which is nice.

I shared this screenshot from Apple Maps just before 8:30 PM on Monday night and as you can see there wasn’t one red line of traffic in, out, or around Manhattan at all. This is not normal.

Wow. Not one single red line of traffic in, out or around Manhattan. pic.twitter.com/yEkuTdupx8