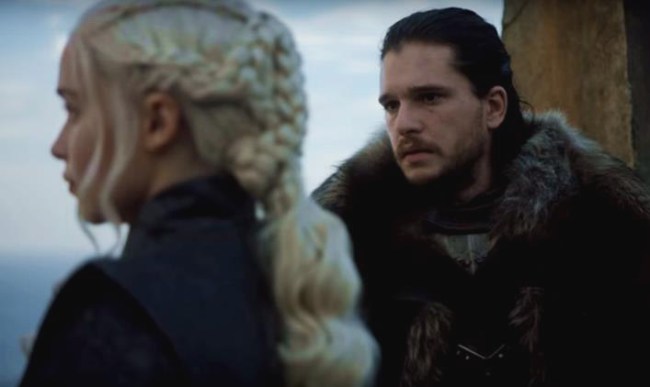 So many Game of Thrones fans want Daenerys Targaryen and Jon Snow to hook up in the season 7 finale coming up this weekend that some pics from a photo shoot that Emilia Clarke and Kit Harington did for Rolling Stone back in 2012 have gone viral.

if anyone wants depression, this is jon's face when dany removes her hand from his pic.twitter.com/1CfkW7Qr8k

The photographer for the shoot, Peggy Sirota, didn’t do much to dissuade people from wanting it to happen either with the caption she used on one of the photos…

“This moment was unforgettable. It was a small crew on that day, just a few of us out in the field. The chemistry between these four was huge, as you can see… I asked them to kiss, I suppose love was in the air, & I was just lucky enough to be there.”

Needless to say, Game of Thrones fans who are seeing these pics for the first time are having a very hard time dealing…

okay…so the pictures of Emilia Clarke and Kit Harrington are going viral and……Y'ALL KNOW WHAT THAT MEANS, RIGHT?! 😂😭😍

can't get over emilia clarke and kit harrington's Rolling Stones photos!! so. much. feels 💓

I ship Kit Harrington and Emilia Clarke so much since I saw their pictures together for the Rolling Stones photoshoot.

I ship Kit Harrington and Emilia Clarke IRL not Jon Snow and Daenerys Targaryan.. @GameOfThrones DO NOT LET THEM END TOGETHER! Only IRL 😏 pic.twitter.com/zQXoqDMEJ6

Screw Daenerys Targaryen and Jon Snow, I’m with that last person. Though I do wonder what Khal Drogo thinks of all of this.