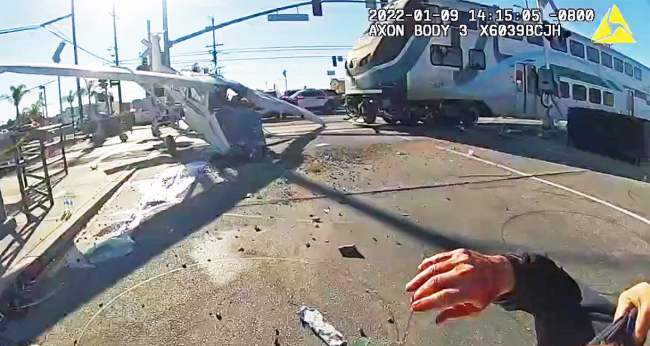 For further proof that heroes do not always wear capes, we go to Pacoima, California where a pilot was rescued from his crashed plane that came to rest on a railroad crossing just before a Metrolink train slammed into it.

The pilot of the Cessna 172 was forced to make a emergency crash landing when the plane lost power, according to the Los Angeles Police Department.

The disabled plane unfortunately ended up on the crossing in the Pacoima neighborhood of Los Angeles between Osborne Street and San Fernando Road near Whiteman Airport.

Thanks to some quick action by officers from the Foothill Division of the Los Angeles Police Department, with assistance from some bystanders, the pilot was able to be pulled from the wreckage mere moments before a double-decker Metrolink commuter train crashed into the plane.

“I had requested Metrolink to cease all train activity, but apparently that didn’t happen,” said Sgt. Joseph Cavestany.

The tense rescue was caught on numerous cameras including a LAPD bodycam.

Los Angeles County Public Works described the pilot’s injuries as “minor” and he was reportedly taken to a regional trauma center for treatment. No other injuries were reported.

“Foothill Division Officers displayed heroism and quick action by saving the life of a pilot who made an emergency landing on the railroad tracks at San Fernando Rd. and Osborne St., just before an oncoming train collided with the aircraft,” the Los Angeles Police Department said in a tweet.

Another angle of the harrowing rescue and the chilling train crash was captured by bystander Luis Jimenez.

@LAPDOVB @LAPDHQ @911LAPD LAPD officers are heroes, thankful for their bravery and valor. Wish you guys were hiring, I am 21.