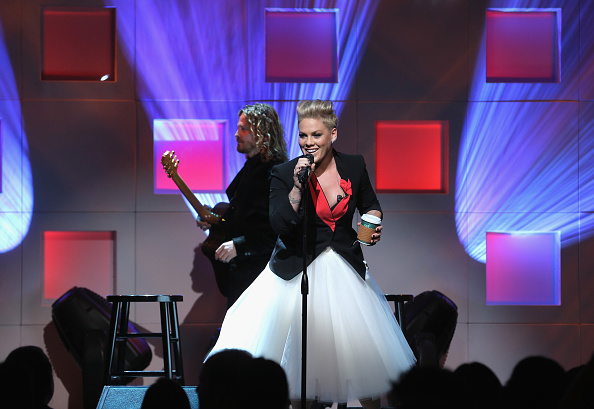 Sometimes even big-time entertainers need some liquid courage to give them the chutzpah to approach fellow big-time entertainers. Celebrities, they’re just like us! When Pink was recording her new album, Beautiful Trauma, she relied on a healthy helping of wine to give her the bravery to drunk-email Eminem to ask him to do a collaboration on the LP. Despite working with Eminem on his Recovery track “Won’t Back Down,” she still felt the need to get a bit tipsy to ask for a verse from the rapper.

In an interview with Entertainment Weekly, Pink explained the boozy invitation to Eminem and his response.

“I sneak-attacked him. [Producer] Max [Martin] and I started making [“Revenge”], and I wrote this rap. We were drinking a lot of wine, and then I went home and I thought more wine would be a good idea. I emailed [Eminem]. This is why they call it liquid courage. And I said, ‘You know I love you. I like that you work with a lot of the same people, like Rihanna. She’s hotter than me, but I’m funnier. So I’m going for a rap Grammy, and I’d like to take you along with me.’ It was this long email, and he wrote back right away and just said, ‘Okay.’”

The beauty of a guy’s response – quick and to the point.

Eminem was in Rio De Janeiro when Pink sent him the request, but he was still able to finish the track and send it back to her only four days later. “I emailed him again, I was like, ‘This is the best thing I’ve ever heard! I want to tackle you and rub your face in the dirt!’” Eminem responded, “He just wrote back and was like, ‘Okay.’”

Once again, the beauty of a guy’s response – quick and to the point.

The moral of the story is that drunk messaging isn’t always bad, but most of the time it is.