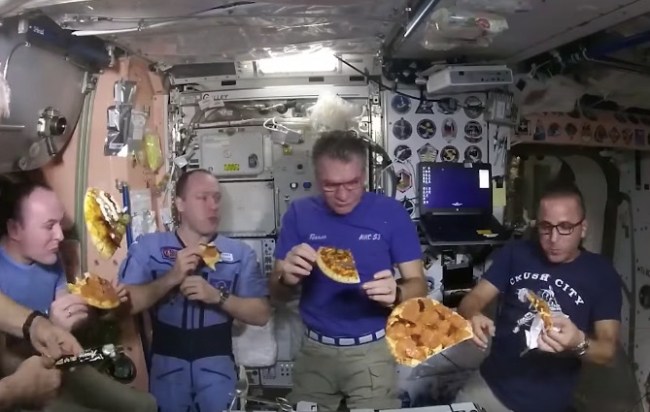 Pizza in outer space isn’t something that happens. Cheese isn’t on the menu for astronauts at the International Space Station (ISS). The menu has remained relatively consistent since Expedition 16 and they’re now on Expedition 53. The menu for astronauts on the International Space Stations expanded over time, and it now includes around 200 items according to Newsweek, but cheese is nowhere to be found on that list of foods which includes things like all of the holiday fixings you’d find for Thanksgiving.

During a live streaming event with his boss, Italian astronaut Paolo Nespoli remarked to his boss on how much he misses and is craving pizza. So what’d his boss do? He had some mother f’n pizza delivered to the space station so that the astronauts could enjoy a pizza night in zero gravity. He didn’t exactly have 90-second in the wood-fired oven Neapolitan-style pizza delivered. Instead, he had sauce, pepperoni, random toppings, and Boboli crusts delivered to outer space.

The astronauts filmed their pizza night on the space station and shared it on YouTube for the whole world to see:

When you really, really miss pizza… you CASUALLY mention it to the International @Space_Station ​ Boss during a live public event 😉 Thank you Kirk for surprising us with unexpectedly delicious pizzas! #VITAmission pic.twitter.com/WstvG3IKr1

Why don’t they have pizza in outer space on the regular? Newsweek reports:

“What works when you’re preparing a recipe for eight doesn’t necessarily work when you’re scaling it up for 200,” she said. “Then when you take it and freeze-dry it and thermostabilize it, it changes the product.”
And sometimes, despite their best efforts, some foods just will never be space friendly, like cheesecake.
“We could not get the color that one would associate with cheesecake, and the texture that most people would consider acceptable for a cheesecake,” said Kloeris.
Occasionally, a commercial cargo vehicle with empty freezer space will be sent up, which is good news for the astronauts. “If they do, and they can spare the mass, they’ll allow us to send ice cream treats to the crew members,” explained Kloeris. (via)

I kind of sense that after this there will be a few more special food deliveries to the ISS. This whole stunt has brought a ton of press to the astronauts on the International Space Station and I’d wager that they’ll want to keep the positive coverage going.