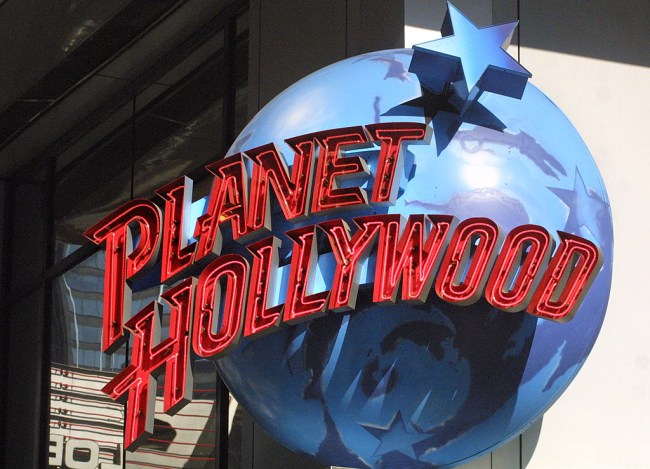 It might sound kind of wild now, but there was once a time long, long ago when people actually spent multiple hours inside surrounded by other people eating meals that didn’t sit in a bag for 20 minutes before being brought to the table and—get this—used real napkins instead of paper towels!

Back when restaurants were still a thing, I took plenty of factors into consideration when deciding where to eat, and while ambiance and decor are certainly important, there was only one thing I really cared about when everything was said and done: whether or not the food was good.

I don’t think it’s particularly unique to care about that aspect more than any other when it comes to deciding where to dine out, as most people want to make sure they’re justified in spending their hard-earned money. With that said, there is a very large chunk of the population that seems to have very different priorities: kids.

In addition to having a grasp on the concept of money that can usually be described as “tenuous at best,” most kids also don’t have the kind of palate you need to justify bringing them to a restaurant that charges $40 for an entree, where they’ll end up bitching and moaning the entire time because their placemat doesn’t even have games.

As a result, your best bet to keep kids happy is to find a dining establishment where they can down their unremarkable chicken fingers while surrounded by shit capable of keeping them entertained, and thankfully, there’s no shortage of themed restaurants out there that can help make that possible.

There was nothing like getting caught in a “storm” at a Rainforest Cafe or being let loose in a Dave & Buster’s as a kid, but as a big movie fan growing up, nothing was cooler than Planet Hollywood.

Sure, I may have only seen around four of the movies represented at each of the few locations I visited but there was still something strangely mesmerizing about getting to gaze at something knowing a famous person touched it once.

Planet Hollywood filed for bankruptcy back in 2001 but managed to turn things around by shuttering a number of restaurants and diversifying its portfolio by opening resorts in exotic locations around the world. However, it turns out the company has another revenue stream I doubt most people are even aware of: Amazon.

Allow me to introduce you to Collectibles by Planet Hollywood, which I was introduced to last night courtesy of Twitter Master Patrick Monahan, who posted a screenshot of an absolute fire ensemble worn in the Weekend at Bernie’s sequel I didn’t know existed—an outfit that was listed at $900 before someone actually pulled the trigger shortly after he made the world aware of its existence.

Lol somebody fucking bought it?! pic.twitter.com/XYqAvx26Gn

After seeing that, I had to find out what other hidden treasures may be lying within Planet Hollywood’s unassuming online storefront. I had to dig through plenty of props from forgettable action thrillers from the 1990s and more pieces of apparel from Stephen Baldwin’s wardrobe than anticipated but I eventually found a few gems that can be yours for the right price (plus shipping). 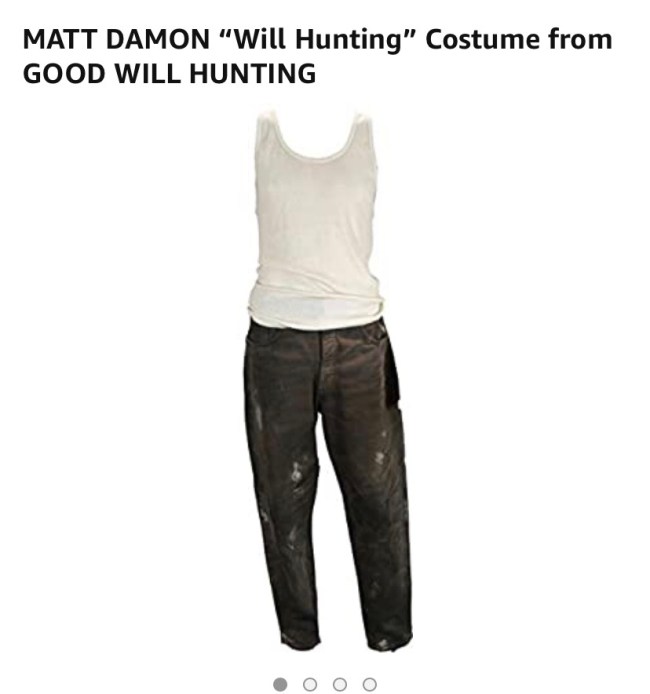 I don’t actually remember when Matt Damon dons this particular getup in the movie, so if you want to drop $700 on something that was worn in none of its most memorable scenes, then this is for you.

I’m personally holding out for the Bruins jacket Ben Affleck rocked but you do you. 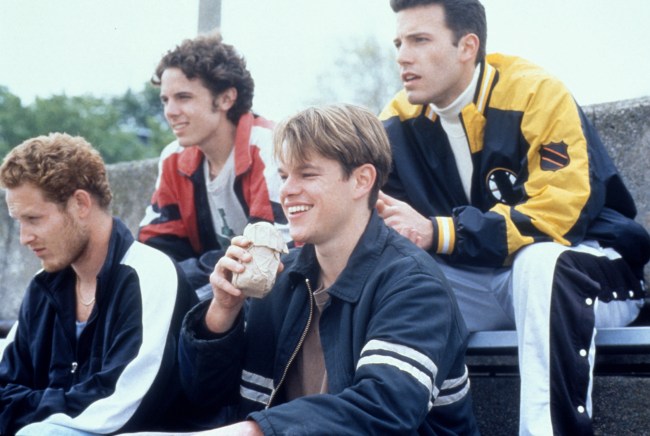 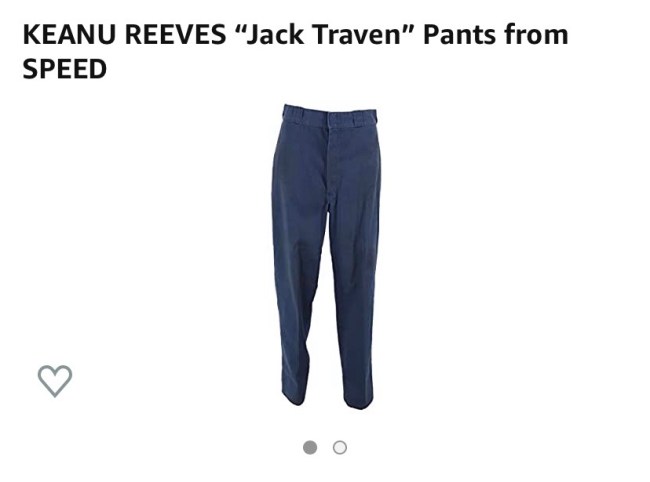 I can’t think of a better conversation starter at a dinner party than: “Hey, you want to see something Keanu Reeves’ dick has kind of touched?”

A Life Mask Of John Candy From Spaceballs ($950) 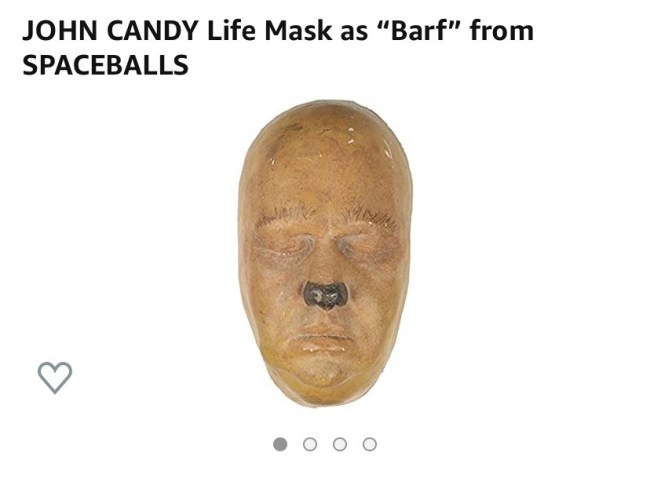 I’d be willing to assume approximately one-half of the people who end up reading this have seen 2018’s Under the Silver Lake but there’s one character who lives in a house where the walls are lined with “death masks” of celebrities in an attempt to keep their memory alive.

The fairly macabre tradition of making plaster masks of the deceased stretches back to the 1800s but Hollywood makeup artists use the same process while developing prosthetics for actors—including the ones John Candy wore when he played Barf in Spaceballs.

It’s a pretty cool piece of memorabilia until you consider he ended up dying seven years after Spaceballs came out. Sure, he may have been alive at the time, but I feel like if I was going to haunt something in the afterlife, it’d be a mask of my own face. 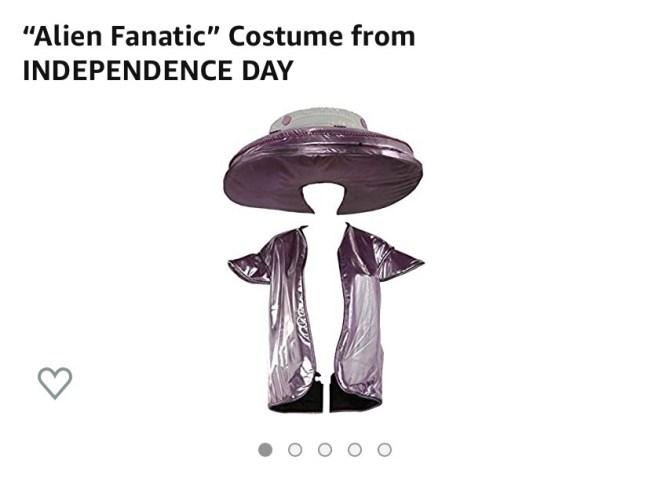 I understand why this outfit was included in the movie but I’d love to know a little more about the background of the character who wore it. Did they have this sitting in a closet waiting for the day aliens finally arrived on Earth? Did they immediately run to Party City after they saw the news to buy it or did they hit up Michaels instead and whip it up as fast as they could?

Sadly, this will probably always be one of life’s eternal mysteries.

A Flight Suit From Independence Day ($500) 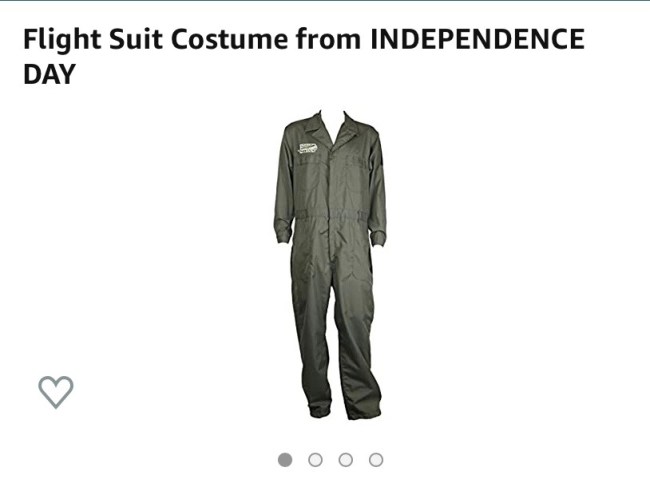 The logical part of my brain is telling me I have no way to justify spending $500 on a flight suit, but if I was going to buy anything in the Planet Hollywood store, it would be this. Sure, it might be a wildly inappropriate piece of apparel to wear in the summer but can you imagine showing up to a Fourth of July party with it on? I can’t think of a more amazing flex.

The upfront cost might be a bit much, but at the same time, if you wear it to Independence Day gatherings for the next 50 years, I think you more than get your money’s worth. 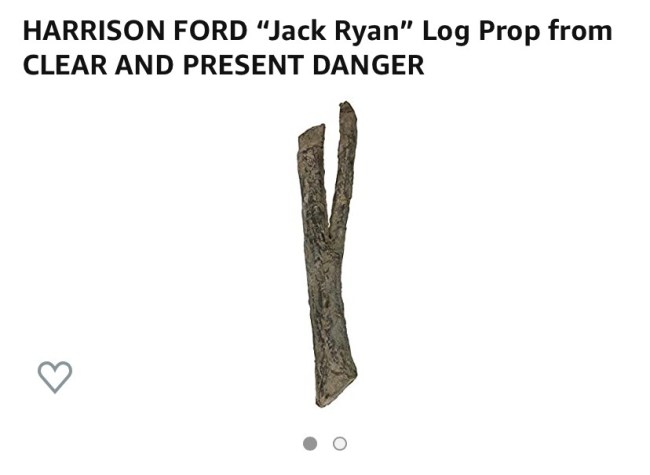 This is a log. Harrison Ford touched it in a Tom Clancy movie. It is $350.

I have nothing else to say.

Clark Gable’s Military Medals And Other Personal Effect From WWII ($2,300) 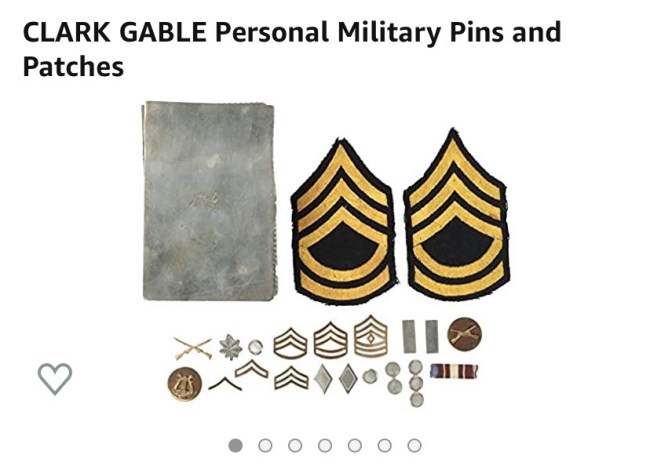 So I’m sure you can get replica medals and insignia for a much more reasonable price than this, and while most people interested in this kind of stuff are legitimate collectors, there’s a group of less savory individuals who seem to get their kicks impersonating members of the armed forces.

I certainly don’t endorse this practice, but if you’re going to show such incredible disregard for people who’ve served their country, why not go all-in and steal the valor of Clark Fucking Gable?

That’s basically it as far as my favorites go, but if you want to kill a solid 25 minutes, feel free to browse the hundreds of items available and see if there’s anything else that strikes your fancy.

The BroBible team writes about gear that we think you want. Occasionally, we write about items that are a part of one of our affiliate partnerships—including weird  and we will get a percentage of the revenue from sales.