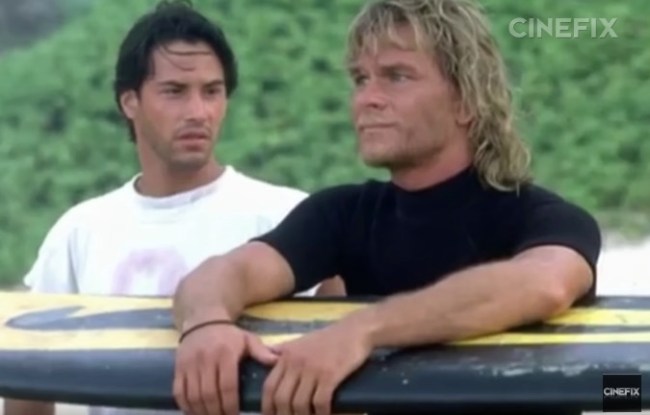 Point Break starring Keanu Reeves, Patrick Swayze, and Gary Busey to name a few was debatably the best movie of 1991. I say ‘debatably’ because 1991 was also the year Terminator 2: Judgment Day, Silence of the Lambs, Hook, and Boyz in the Hood were all released and choosing the ‘best’ is going to be a matter of preference here because while I might prefer Point Break you might be into Terminator 2 or City Slickers, or maybe The Last Boyscout was tied for your favorite movie of the year along with My Girl. I’m not here to judge, I’m just going to say that I think Point Break reigns supreme for me in 1991.

The CineFix YouTube channel put together this clip of ‘7 things you probably didn’t know about Point Break‘ and it’s a glorious look back at some of the behind-the-scenes trivia you might not know. It explains things like why Anthony Kiedis of the Red Hot Chili Peppers got his ass beaten so quickly during the fight scene after one of Johnny Utah’s surfing session. There’s also a great factoid about how Patrick Swayze royally destroying his knee during a scene that focused on a knee injury sustained by Keanu Reeves.

In retrospect, I think Patrick Swayze might’ve been the biggest bro of 1991. It sounds like all he wanted to do was skydive, play football, surf, and lift weights so he could stay jacked. May he rest in peace, and fuck cancer.