Police Seize Over 1,600 Pounds Of Cocaine Hidden Inside Pineapples 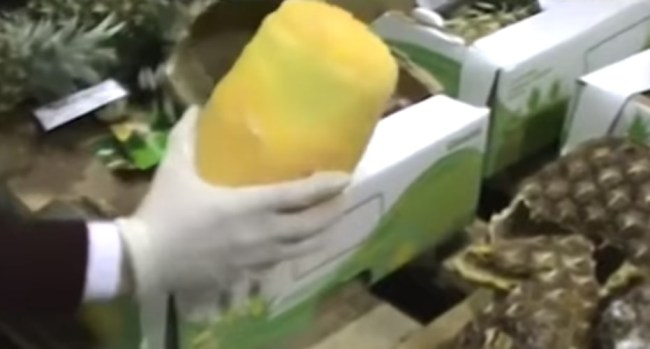 Drug smugglers hid a massive amount of cocaine inside pineapples, but the shipment was seized by police in Spain and Portugal. Old and Busted: Pineapple Pizza. New Hotness: Pineapple Cocaine. The joint investigation of nearly a year led them to investigate shipping containers of pineapples from South America that were stuffed with cocaine. Police seized 1,642 pounds of coke that were packed into the hollowed out tropical fruit. Based on this Business Insider article stating that pure cocaine costs $150 per gram, that would make this drug bust worth $111,719,700. People are going to be so disappointed when they cut open their pineapple and it’s just pineapple inside.

After the huge drug bust, authorities raided a lab in Spain where the nose sugar was going to be cut and repackaged. Police made arrests of nine gang members. Based on this Business Insider article stating that pure cocaine costs $150 per gram, that would make this drug bust worth $111,719,700. The source of the drugs allegedly came from Colombia. “This organized international group had repeatedly brought large quantities of cocaine to the European continent,” police in Portugal said in a statement about the Colombian group. The pineapple express has broken down. Imagine that one of these spiked pineapples actually made it to the grocery store? You buy one, take it home, cut it open… and PRESTO! You’ve got a shit-ton of coke spill all over your kitchen counter?