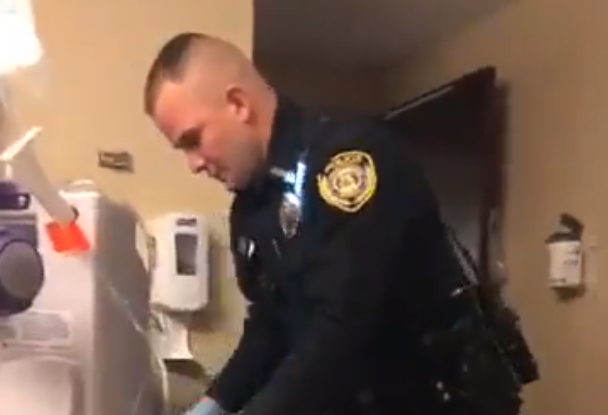 Via Nolan's Tribe of Warriors Against Cancer

All cancer is terrifying, but Nolan Sousley has one of the most deadly, fastest-spreading and most aggressive types of cancer — pancreatic cancer. There are four stages of cancer, with the most advanced being Stage 4, where cancer has spread to other organs or different parts of the body. The five-year survival rate for Stage IV pancreatic cancer is 3 percent. It is basically a death sentence and the same cancer and stage that Alex Trebek has.

So Nolan uses THC pills to ease the pain of what must be absolute torture, not to mention knowing you might have only days, not years of your life to live. Apparently, some nosybody smelled marijuana near Nolan’s hospital room and the snitch called the police to file a report. Several officers from the Bolivar Police Department in Missouri responded to the call and searched Nolan’s hospital room.

The cops thoroughly rifled through his belongings and bags of Nolan’s family that were in the room on Wednesday night. Nolan livestreamed the rigorous hunt for the marijuana by police on his “Tribe of Warriors Against Cancer” Facebook page. Nolan said he doesn’t smoke any marijuana, but he does take THC pills to ease his suffering.

Nolan allowed police to peek inside one of his bags, but refused a search of the entire bag because it has his “final days things in there.” Nolan said “nobody is gonna dig in there” and “I’m not digging it out for anybody.”

The original Facebook video has gone viral with over half of a million views on Facebook and many more on other social media platforms such as YouTube and Twitter. In the end, police did not find any marijuana and Nolan was not arrested or given a citation.

The police are doing their job, that’s understandable, but you’re really going to tear up the entire hospital room for some weed of a man literally dying before your eyes? The cops could have searched a bag or two and when they found nothing they should have left. Maybe give him a warning to not smoke in the hospital room and wish him luck in his battle against his terminal diagnosis. Even if he did smoke weed in the hospital, give the guy a f*cking break, he has Stage 4 pancreatic cancer. Not to mention that there are multiple officers spending their time looking for weed of a dying man in a hospital. Unless every real crime in Bolivar, Missouri has been solved, then this seems to be a huge mismanagement of valuable city resources.

It’s such a joke that three police officers are searching for weed being used by a Stage 4 cancer sufferer in the same exact building where doctors are prescribing extremely dangerous and addictive drugs such as OxyContin, Vicodin, Benzodiazepines, Methadone, and Fentanyl. But because big pharma hasn’t monopolized the cannabis industry, marijuana is still illegal in most of the United States.

Let’s all hope that Nolan Sousey is able to fight for his life and beat the cancer that he has.