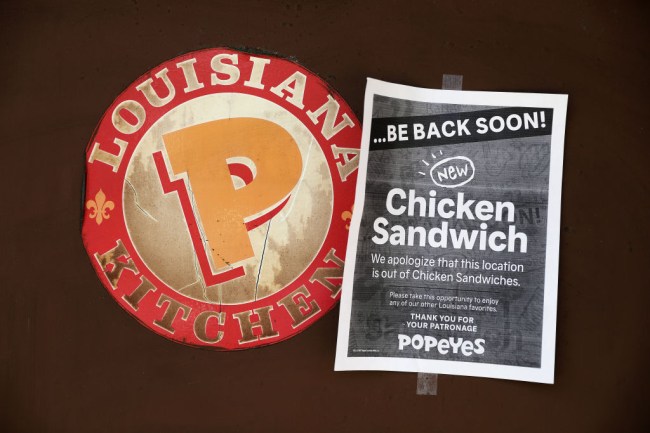 It’s been exactly a month since Popeyes whipped the fast food world into a frenzy when it decided to go to war with Chick-fil-A by releasing its own interpretation of its competitor’s legendary chicken sandwich but it’s safe to say the company never anticipated the response it would receive.

You might not be able to get yourself a Chick-fil-A sandwich on Sundays but you can no longer get Popeyes version on any day of the week, much to the chagrin of the guy who filed a lawsuit against the chain and the armed group that stormed a location in Texas after being informed they were sold out.

It’s safe to say Popeyes didn’t anticipate just how much hype the new menu item would generate, and while they’re currently working with their suppliers to bring it back, they’ve come up with a new—and impressively dumb—strategy for anyone who just can’t wait.

On Thursday, Popeyes announced its new “Bring Your Own Bun” initiative, which urges hungry customers to construct their very own sandwich by buying a three-piece order of chicken tenders and placing them on their carbohydrate of choice.

As an astute observer may notice, you’d also have to bring your own pickles and mayo if you want to come close to experiencing the magic of the actual Popeyes sandwich, which seems like a bit of an oversight.

As a result, I think I’ll stick to my tried-and-tested strategy as far as bootleg chicken sandwiches are concerned: ordering two pieces of Texas toast at Raising Cane’s, covering some chicken in fry sauce, and going to town.

You can thank me later for that life hack.