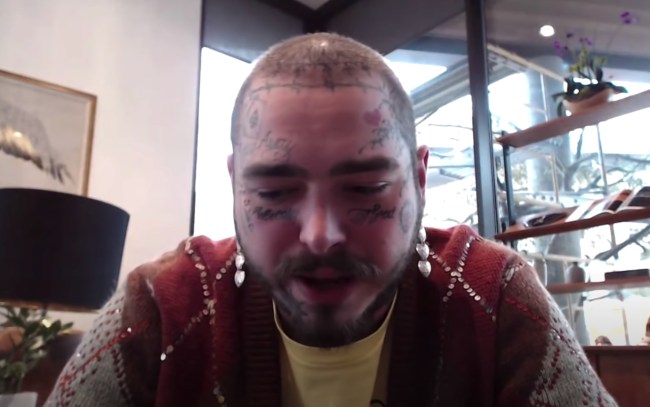 Post Malone is debuting a new show this week, Post Malone’s Celebrity World Pong League, which we’ll all be able to watch on Facebook and Messenger. This is a natural fit for Post Malone who is famous for playing beer pong with celebrities and athletes like Patrick Mahomes after his concerts and dropping small fortunes at NYC gentlemen’s clubs while playing pong after performing sold-out Madison Square Garden shows.

Malone was a guest on The Tonight Show Starring Jimmy Fallon to round out last week and Jimmy got Post to open up about the world of celebrity beer pong the rest of us might not ever get a chance to see. Post put Drake on blast as being the worst rapper to play beer pong. “Man, he sucks.” And he didn’t stop there in talking about how awful Drake is at beer pong.

He then issued an open challenge to Drake saying to come to meet him and they’d play again, a small chance at redemption for Drake. When asked about how the best beer pong player out there is, Post Malone mentioned Kevin Durant which is the least shocking answer ever. The dude is 6’10” tall and a perennial NBA All-Star. His angle to the cup is unreal. But Post also called it out as basically ‘cheating’ because KD’s so tall his elbows cross the line every shot.

Here’s the interview from Fallon:

I respect Post getting a Kansas City Chiefs as part of a beer pong bet. There are few things I used to enjoy more than high-stakes beer pong and by that, I mean betting Benjamins and not ink on my body. That’s too risky for me. But putting some money on the line with strangers at a bar has always made the night more fun.

Will I ever get around to watching a single episode of Post Malone’s Celebrity World Pong League? I’m not so sure I will. The idea of watching a show on Facebook’s Messenger doesn’t sound all that awesome. Episodes begin premiering this week on Wednesday and Friday and will include celebrities such as The Chainsmokers, Diplo, Machine Gun Kelly, and more.