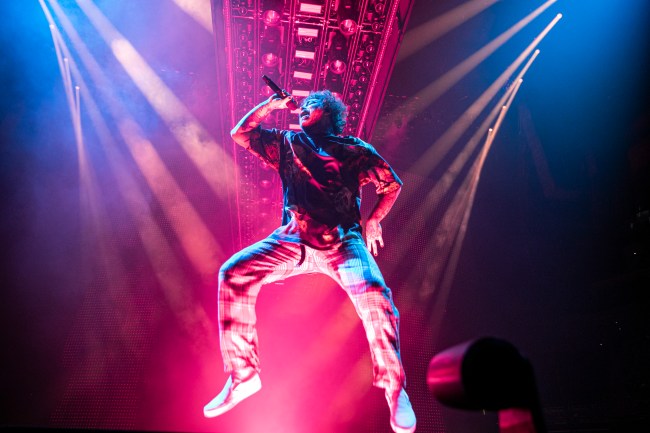 Rapper Post Malone has been in Manhattan this week performing back-to-back sold-out concerts at Madison Square Garden. Someone uploaded HD video of his concert below which you can watch, assuming it doesn’t get taken down (there’s no reason it should), but before that let’s talk about how this is Post Malone‘s world and we’re just living in it.

Anyone who has met Post Malone is quick to say that he’s one of the nicest and most humble people on the planet. I haven’t even met the guy (yet) but I can see this clear as day anytime I see an interview with him.

Seriously, watch any of his Tonight Show w/ Jimmy Fallon interviews and tell me he doesn’t come off as one of the most genuinely nice people in pop culture. Anyone who can’t see it is blinded by the face tattoos.

Post Malone’s reputation as the nicest guy around was confirmed to PageSix by a ‘source’ at FlashDancers who tipped them off to his rock start night at the Manhattan strip club. He made it rain with $50K in ones, took his clothes off for beer pong, partied with other rappers, AND THEY STILL complimented him as the nicest celebrity to ever step foot in that strip club.

I haven’t been to that FlashDancers location in years but it’s nice to know that it’s still a place where anything goes, at least based on these reports:

We hear Post took on the club’s dancers in the game early Wednesday morning, and that “undergarments were soon flying” at FlashDancers on Murray Street.

We’re told he made it rain — or, more to the point, made it flood. “He had $50,000 in singles he was throwing out,” said a source. “Everyone was saying he’s the nicest celebrity who has ever been in.”

Post was also spotted getting on top of the bar during the bash. We’re told Quincy, Rich the Kid, Tyla Yaweh and manager Dre London partied with him. He hung out with Drake earlier, stopping by the Moxy East Village’s Little Sister Lounge. (via PageSix)

I repeat: he took HIS clothes off at the strip club and they still called him the nicest guy ever. He is that dude right now and he’s living on top of the world. You love to see it.

Here’s that full concert footage from his Madison Square Garden concert on Tuesday night. Some person recorded it on their cellphone but the footage is actually pretty good from the floor seats.

By the way, if you haven’t caught up on these Post Malone Memes from two weeks ago where a fan flashed him and his surprised reaction was caught on camera and immediately turned into a viral meme then you 100% should by clicking that link because they’re great stuff.