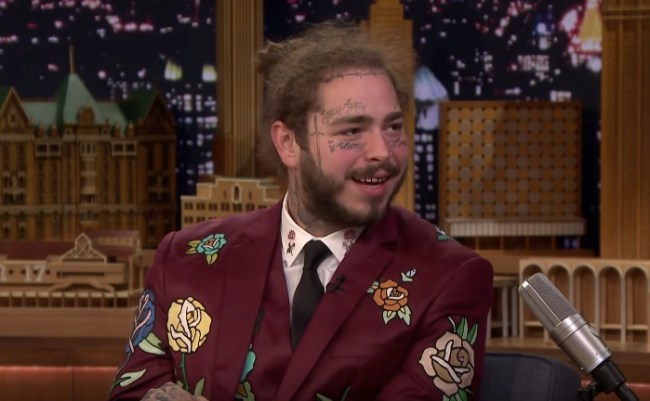 Post Malone is one of the most likable people in the business right now. He’s absolutely killing it on the charts in a way that nobody’s seen in decades.

In August, Post Malone broke Michael Jackson’s 34-year-old record after his album Stoney spent 77 weeks in the top 10 of the Billboard ‘Top R&B and Hip-Hop Albums’ chart. Michael Jackson previously held the record with 76 weeks for Thriller. His second album, Beerbongs & Bentleys has already gone double platinum in 2018, hit the #1 spot on the Billboard Hot 100, and it opened at #1 on the Billboard 200 chart.

So what’s next for Post Malone? Well, last night he was a guest on The Tonight Show Starring Jimmy Fallon where he debuted 10 seconds of his new song that’ll soon appear on the Into the Spider-Verse video game soundtrack. He announced ‘Posty Fest’, an upcoming music festival that he’ll headline. And he talked about how he got his break, his rise to stardom, and his tattoos.

Posty Fest will be held Halloween weekend in Dallas, Texas and will feature Post Malone, Travis Scott, Tyler The Creator, and more.

One story that stood out to me in this segment is when Jimmy asked Post Malone (real name Austin Richard Post) about his tattoos and he talked about getting his very first tattoo, a Playboy bunny, after trashing Justin Bieber. His rationale was that he’s 100% tougher than Justin and Justin had a bunch of tats. So he didn’t think he’d be a problem at all.

Well, the pain of the tattoo wasn’t necessarily a problem. The issue came when he played ball with Justin the day after getting his first ink. The story comes in the latter half of this segment but I recommend watching the full clip:

If you enjoyed that there was another quick segment where he teases Posty Fest and invites Jimmy Fallon to eat at the Olive Garden where he celebrates every milestone in his career. You can check this clip out for info on Posty Fest:

It’s kind of bullshit that Jimmy’s never been to the Olive Garden in his life. It’s like 5 blocks from where he films The Tonight Show Starring Jimmy Fallon and it was just as close when he was on SNL. I understand being a New Yorker and wanting to stay the f*ck out of Times Square whenever possible but everyone needs to experience the O.G. at least once in life.