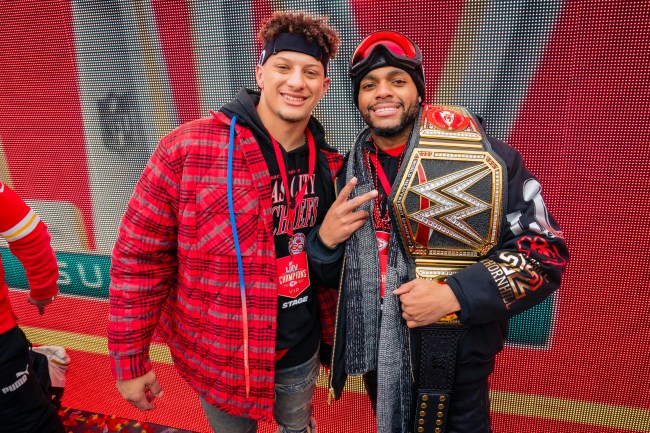 It’s Patrick Mahomes‘ world right now and we’re just living in it. At least that’s the case in Kansas City, Missouri where Mahomes was welcomed like The Beatles as he strolled into Post Malone‘s sold-out concert at the Sprint Center.

This came hours after the Kansas City Chiefs held their Super Bowl championship parade, the first time Kansas City’s been able to celebrate a Super Bowl in 50 years. The arrest reports from the parade were STRAIGHT UP WILD by the way. They included a stoned guy on a horse and some drunk guy falling out of a tree.

Mahomes, Travis Kelce, and other members of the Kansas City Chiefs were given the red carpet VIP treatment at Post Malone’s concert. Posty would’ve done this for them on any night but the fact that they’re coming off a Super Bowl win just 72 hours prior is the cherry on top here.

Malone rocked a Chiefs jersey on stage as a tribute to the team’s Super Bowl win and after the show the players and their ‘their gals’ were invted backstage to play beer pong, according to TMZ. This is all after the Chiefs players had been boozing HARD since at least 10am (the parade).

Someone captured footage of Mahomes as he walked into the sold-out arena and the place went ELECTRIC for their Super Bowl MVP, the man who brought Kansas City its first Super Bowl title in half a century. Check it out:

It has to feel pretty damn good to be Patrick Mahomes right now, doesn’t it? Not that there’s ever a bad time to walk in his shoes. He’s one of the best athletes in the world and a multi-millionaire. Must be nice.

Here’s post paying tribute to the Chiefs by wearing his jersey on stage:

TMZ reports the players (Mahomes, Kelce, etc) were treated to a roped-off VIP area for the concert at the Sprint Center on Wednesday before they got to kick it backstage with Malone.