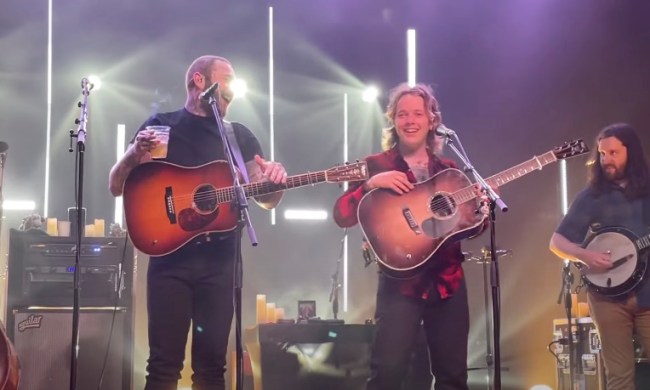 It finally happened. Billy Strings was joined onstage by Post Malone in California, nearly two years after Strings’ posted an Instagram photo of the two together, doing “redneck sh*t with my boy” and a hashtag “#f*ckaroundandfindout.”

The Billy Strings and Post Malone bromance is one of the most exciting buddy stories in the music world. In July 2020, Strings covered Post Malone’s “Circles” during a virtual show at Brooklyn Bowl Nashville, with Sierra Hull on the mandolin. Post Malone and Strings hung out a little later that year, causing speculation that the two were working on a collaboration together.

Post Malone, meanwhile, isn’t afraid to showcase his love for country music. In March 2021, Post busted out an excellent cover of Sturgill Simpson’s “You Can Have The Crown” and Brad Paisley’s “I’m Gonna Miss Her”, with an assist from Dwight Yoakam’s band.

Billy Strings is currently on a west coast spring tour through California. After two nights at the Santa Barbara Bowl and a day off, Strings was joined by Post Malone at The Observatory in Santa Ana, California.

“I saw this guy lurking around backstage and I figured we have to drag him up here to sing it for you,” Billy Strings told the audience.

Post Malone came out to cheers with an acoustic guitar, beverage and cigarette in hand.

“Billy Strings is the best to ever fucking do it, ever,” Posty tells the audience while grabbing the mic.

“Let’s do the Johnny Cash song…”

Here’s a video of Post Malone with Billy Strings. I’m sure it will be on nugs.net in the next couple of days (disclaimer, affiliate link).

Pretty cool to see two authentic dudes with tons of talent collaborate like this. While Posty is a household name for pop anthems like “Better Now” and “Rockstar”, the Beerbongs and Bentleys rapper clearly loves pushing up his sleeves to perform other kinds of music as well.

All I know is that, if you’re a music fan, you know that Posty is right. Billy Strings is one of the most exciting acts in the live music world right now. Even if bluegrass isn’t your thing, you can’t help but love his raw talent. His ability to perform dizzying, Stevie Ray Vaughan-esque guitar solos while shredding on the acoustic guitar is jaw-dropping.

I saw Strings on Saturday night at the Santa Barabara Bowl and everyone left feeling like they just witnessed something special – a musical iconoclast in the making. It’s a little bit honky tony, a little bit psychedelic, and just an overall damn good time.

Strings is truly a generational talent like that. Can’t wait to see him again in San Diego this weekend.

Pretty cool to see that Posty knows what’s up. I think I speak for a ton of music fans when I say that we’re all excited to see what they cook up together next.

Hopefully, say, an entire album? One can dream…