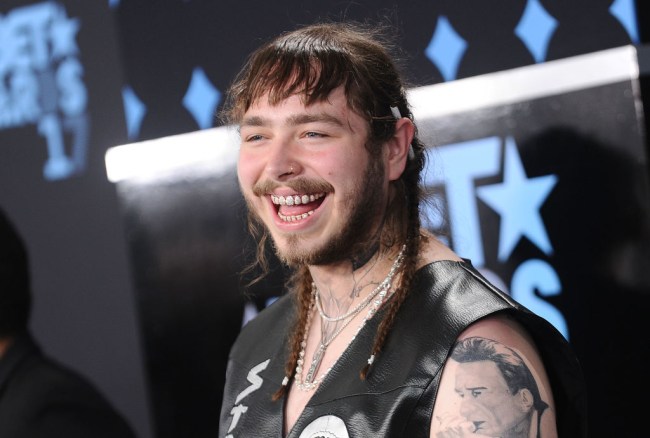 Post Malone is a force. The 22-year-old is a certified quadruple platinum rapper who recently broke several streaming records with the release of his sophomore album, Beerbongs and Bentleys, en route to gaining platinum certification in the first four days of its release. Despite his nearly ubiquitous popularity, he has still yet to win over nostalgic 90s rap fans who have witnessed mumble rappers of new hijack the hip hop landscape.

In an apparent effort to remedy the ever-expanding divide between new and old, the Rockstar brought in an iconic figure from the childhood of those old enough to remember Surge and floppy disk drives.

Infinity War is the most ambitious crossover of all-time….

Post (you know I’m hip and with it when I don’t refer to his last stage name) didn’t just snap a photo with the WWE legend, he brought the scary motherfucker on stage to chokeslam his ass at his Austin, Texas show.

The 53-year-old gatekeeper also helped the rapper smash guitars during a awesome guitar solo at the end of Rockstar.

THE FREAKING UNDERTAKER WAS AT POST MALONES CONCERT pic.twitter.com/b6fYBIuevV

The highlight of tonight’s @PostMalone show was WHEN HE BROUGHT THE UNDERTAKER OUT TO SMASH GUITARS BAH GAWD THAT’S THE UNDERTAKER’S MUSIC pic.twitter.com/EfAxA4I76W

For those still not convinced that Post Malone is worthy of your time, take a listen to his cover of Nirvana’s All Apologies at the House of Blues in Boston.