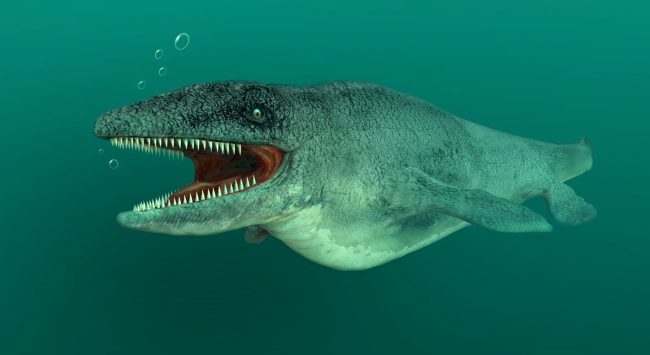 What a wild week in the world of dinosaurs. First, we had news that a new company plans to bring the woolly mammoth back from extinction within six years. Now we’ve got a report that a giant 18 foot long sea monster used to live in Kansas, back when the region was covered by an ocean.

The prehistoric beast, a mosasaur, had a head that was about two feet long, a slender, tooth-lined snout, and lived in the Cretaceous waters of the Western Interior Seaway around 80 million years ago.

“It’s a kind of skinny snout for agile, speedy snapping of fish, rather than biting into something hard like turtle shells,” Takuya Konishi, a vertebrate paleontologist and assistant professor at the University of Cincinnati, told LiveScience.

Paleontologists discovered the fossil of this beast in the 1970s, but they had difficulty classifying it, so it ended up stored with other mosasaur specimens in the Platecarpus genus, at Fort Hays State University’s Sternberg Museum of Natural History (FHSM) in Kansas.

Recently, researchers revisited the enigmatic fossil — pieces of a skull, jaw and a few bones from behind the head — and found that the reptile didn’t belong in the Platecarpus genus. Rather, it was a close relative of a rare mosasaur species known from just one specimen, scientists reported in a new study.

The newly described species, formerly known as specimen FHSM VP-5515 and now named Ectenosaurus everhartorum, is the second known species in the Ectenosaurus genus. The only other species is Ectenosaurus clidastoides, which was described in 1967, according to the study.

Related: Dinosaur Remains On The Moon? A Couple Of Scientists Think So And Their Theory Isn’t That Crazy

“We knew it was a new species, but we didn’t know if it was an Ectenosaurus or not,” said Konishi, a co-author of the study published recently in the Canadian Journal of Earth Sciences. “To answer that puzzle, we were eventually able to find another feature where the jaw joint was, at the back end of the lower jaw.” There, the researchers detected a small notch that didn’t appear in any mosasaur species — except one.

“That little depression turned out to be a newly discovered consistent feature for the genus Ectenosaurus. You have this Ectenosaurus united by the little notch at the end of the lower jaw, but then it’s consistently different at the level of the species from the generic type — that is to say, the first species assigned to the genus.”

Amazingly, paleontologists have discovered more than 1,800 mosasaur samples in this area of Kansas, but this is only the second time they’ve found Ectenosaurus genus fossils.

“That’s very strange,” Konishi told LiveScience. “Why is it so rare for a mosasaur, where you have hundreds of Platecarpus from the same locality? Does that mean they were living near shore, or were they living farther south or farther north? We just don’t know.”

Also, who knew Kansas, of all places, was such a hot spot for giant prehistoric sea creatures?