Dinosaur Remains On The Moon? A Couple Of Scientists Think So And Their Theory Isn’t That Crazy 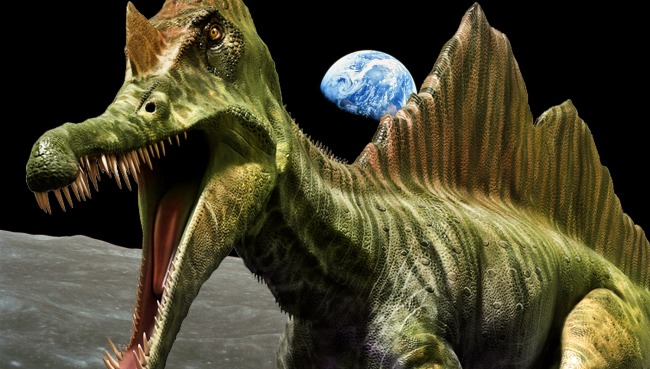 According to award winning science journalist Peter Brannen in his 2017 book The Ends of the World, we should not be too surprised if at some point in the future we find dinosaur remains on the surface of the moon. Probably right around the time we start construction on that moon city for astronauts.

How could this be possible? Excellent question.

Science claims that around 66 million years ago, a mother of an asteroid plowed into Earth killing everything on the planet, including all of the dinosaurs.

The asteroid, which is believed to have been larger than Mount Everest, hit the planet with such violence when it made its collision with Earth that, according to Brannen, it ripped a “hole of outer space vacuum in the atmosphere.’

Still with me? Okay, good.

The giant space rock was also traveling at an astronical rate of speed – 20 times faster than a speeding bullet – when it impacted Mexico’s Yucatán Peninsula and created the Chicxulub Crater.

“This is so fast that it would have traversed the distance from the cruising altitude of a 747 to the ground in 0.3 seconds,” Brannen wrote.

As a result, the collision with Earth was so devastating that it sent large volumes of debris from the planet into outer space.

Some of that debris that was launched into space, says Brannen, was “bits of dinosaurs.”

Therefore, it is highly likely that there are remains of dinosaurs on the Earth’s moon.

You have to admit, that’s pretty good.

This description of the asteroid that killed the dinosaurs is probably the best piece of writing I've read in a while. That was beautiful. pic.twitter.com/13iLrLrMe2

In fact, it’s such a good theory that geophysicist Mario Rebolledo at the Centro de Investigación agreed with Brannen, saying in the book, “The pressure of the atmosphere front of the asteroid started excavating the crater before it even got there.

“Then, when the meteorite touched ground zero, it was totally intact. It was so massive that the atmosphere didn’t even make a scratch on it.”

So, how did this giant, deadly asteroid rip a hole of outer space vacuum in the atmosphere?

Easy, now that we have Mr. Rebolledo’s take.

“As the asteroid collided with the earth, in the sky above it where there should have been air, the rock had punched a hole” in it, explained Brannen.

“As the heavens rushed in to close this hole, enormous volumes of earth were expelled into orbit and beyond — all within a second or two of impact,” he added.

“So there’s probably little bits of dinosaur bone on the moon.”

Of course, the aliens who have been monitoring Earth from their bases on the moon have already known all of this for years.