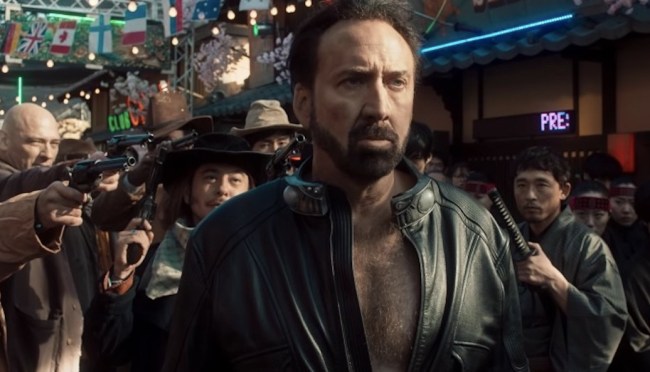 I’ve been thinking about Nicolas Cage a lot. More so than usual, at least. It’s because I checked out his new movie Pig last week and it was fucking excellent. Just great. He’s been doing his Nic Cage thing for a while now so it’s easy to forget that buried underneath all of the madness and B-movies is a legitimately great actor.

‘Pig’ is still and delicate but also fierce and brutal. It’s slow and ruminative and challenging the whole way through and certainly won’t please all comers.

Nicolas Cage is fucking great *could* have an outside shot at an Academy Award nomination.

That said, Cage’s latest flick, Prisoners of the Ghostland, certainly looks like it will be more of what we’ve come to expect from Cage, as the Oscar-winner himself has described the film as “the wildest movie [he’s] ever made.” And based on the trailer, it’s quite easy to see why he feels that way:

Here’s the official synopsis for Prisoners of the Ghostland, which I will certainly be checking out the first chance I get.

In the treacherous frontier city of Samurai Town, a ruthless bank robber (Nicolas Cage) is sprung from jail by wealthy warlord The Governor (Bill Moseley), whose adopted granddaughter Bernice (Sofia Boutella) has gone missing. The Governor offers the prisoner his freedom in exchange for retrieving the runaway. Strapped into a leather suit that will self-destruct within five days, the bandit sets off on a journey to find the young woman—and his own path to redemption.

Prisoners of the Ghostland, which stars Sofia Boutella, Nick Cassavetes, Ed Skrein, and Bill Moseley in addition to Nicolas Cage, hits theaters and PVOD on September 17.