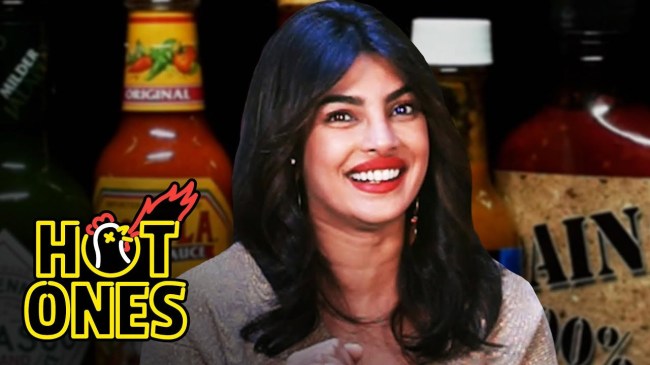 Baywatch star Priyanka Chopra Jonas has a cople of new movies either out or coming out on Netflix: The White Tiger and We Can Be Heroes. She also has a memoir titled Unfinished coming out in a couple of weeks.

So because she doesn’t have any more fake clapping for first responders to do, and has those three projects coming up, she decided to join First We Feast for their always entertaining “Hot Ones” Challenge.

This isn’t Priyanka’s first rodeo when it comes to running the hot wings gauntlet.

Back in October of 2019, Chopra Jonas did a little mini-version of it with Jimmy Fallon during an appearance on The Tonight Show.

As you can see, she barely made it through that one so it will be very interesting to see how she does this time with that experience already under her belt.

She gets off to a bit of a rocky start by admitting that, even with her previous experience, she’s still “terrified.” And it all kind of goes downhill from there.

In between her suffering, Chopra Jonas does manage to sneak in some discussion with host Sean Evans on topics like the difference between Indian food in New York and LA, explaining why she met Larry Bird, which beach coastlines are the best in the world, and winning Miss World as a 17-year-old which leads to her definition of the “essence of hot sauce.”