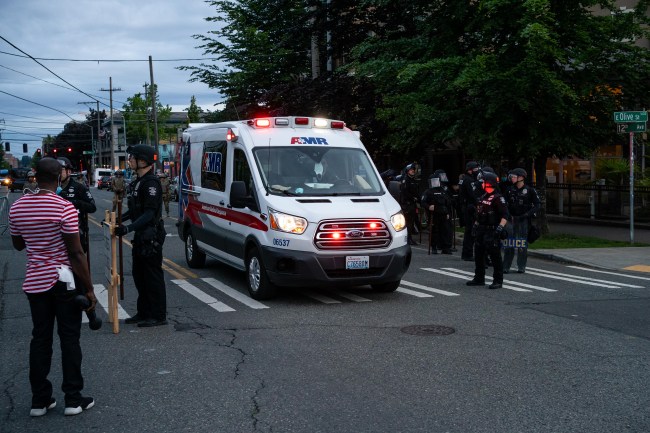 A man drove his car into a crowd of protesters in Seattle and shot someone during a protest in the city on Sunday night.

The Seattle PD confirmed on Twitter that the suspect had been taken into custody.

Suspect in custody, gun recovered after man drove vehicle into crowd at 11th and Pine. Seattle Fire transported victim to hospital. Officers searched, but do not believe there are any additional victims. Will provide updates when available.

Overhead video of the incident shows the man driving the car in a street filled with protesters, hitting a barricade, and then exiting the vehicle brandishing a gun.

Video footage of man driving his car into BLM protest in Seattle and shooting a man through the window before he flees pic.twitter.com/Kq6cSe5Bb0

During the altercation, a 26-year-old protester named Daniel got shot in the arm when he ran up to the vehicle and attempted to pull the man out of the car which could be seen in the video below.

Here’s another view of it. It looks like Daniel was running after the car to get to the driver before he could reach the crowd. Daniel says he got a punch in before the gun went off. A witness gave #Q13FOX permission to use this video. pic.twitter.com/1GvajvtSJZ

Daniel talked about the altercation while being attended to by street medics at the scene.

Story unclear at the moment but young man shot on 11th and Pine. Daniel, 26, wanted to tell his story. With the help of other medics I got a tourniquet on his arm. Street medics were on the spot with gauze and pressure. He walked off the scene. pic.twitter.com/g9Ism58YkF

Daniel was later taken to the hospital and is in stable condition according to the Seattle Fire Dept.

11th Ave. and Pine St: Patient is an approx. 27-year-old male who is in stable condition. Transported to Harborview via SFD medics.

REMINDER: if you are in a crowd and need medical assistance, walk to the perimeter of the crowd if you can and call 911 or find a first responder. https://t.co/uvihubuQFt