Protesters Try To Give Pepsi To Police To Promote Peace And Harmony: ‘It Helped In The Commercial’ 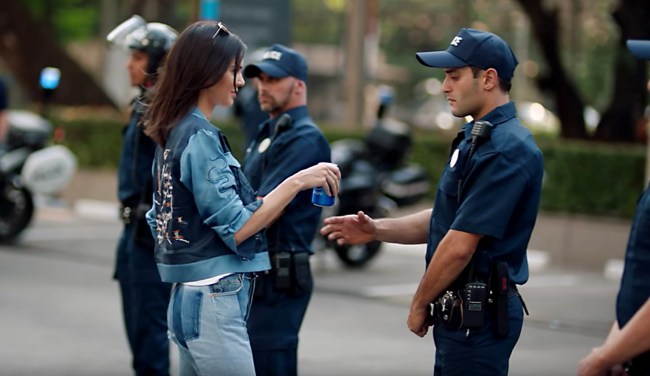 As we confirmed last week, the Pepsi commercial starring Kendall Jenner giving a can of the sugary nectar to a policeman at a protest has had little to no positive effect on the relationship between the citizens of America and the five-0.

Of course, today’s protesters aren’t acting like a flash mob dance party, but still… there are many issues to work out.

Naturally, seeing as how that video had such an impact on the fuzz when KJ dropped a Pepsi on them, not one, but two people decided to give it one more try using the soft drink as symbol of peace.

Last week at a protest in Los Angeles, comedian Everett Byram approached a police officer, just like Kendall, and said, “Hey, you guys, like a Kardashian over here, hey, look, it’s a Pepsi, want Pepsi? Have it! Have a Pepsi, dude.”

Sadly, instead of taking the Pepsi and doing a little jig, the officer says he appreciated the offer but would like Byram to back up.

“But it helped in the commercial,” exclaimed Byram, to which the officer responded, “I don’t drink soda.”

The day before in Texas, seeing as how great minds like Kendall Jenner’s think alike, someone else also tried the Pepsi maneuver on John Law.

It too did not seem to have much of a positive effect on the situation.

Why is this not working?

Did you try being a millionaire white girl?

Ah yes. There we go.

and so we dunk on them when we can