Purdue Is Forcing Freshman Into Terrible, Makeshift Dorms After Accepting Too Many Students 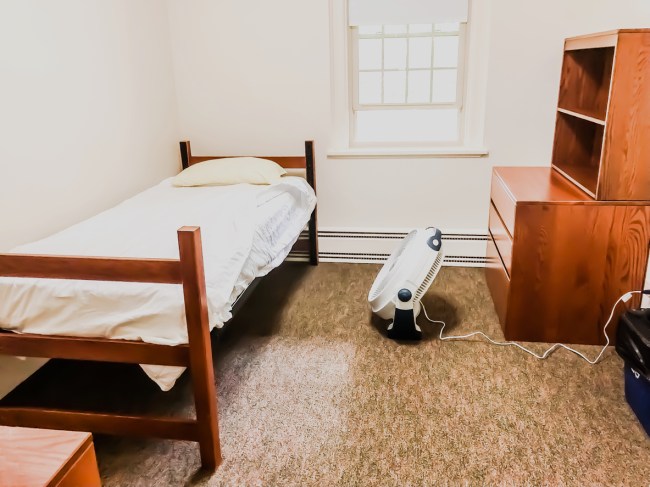 With over 10,000 new students arriving in West Lafayette, Ind., many students are being forced into auxiliary housing. In other instances, double rooms are being made into triple or quadruple rooms.

One video in particular went viral earlier in the summer that showed mass dorm rooms that look more like barracks.

The video raised quite a few questions:

Another video posted on TikTok shared the living conditions for a makeshift quadruple room. It looks better than the alternative, but there are no closets or true desk and appears to be a classroom.

These makeshift dorm rooms, housing up to 10 people, fall under Purdue’s definition of “auxiliary housing.” Students in the temporary spaces are moved to a bed in a traditional room as soon as one is available.

That timeline, however, might be longer than could be considered “temporary.”

According to Purdue spokesperson Tim Doty and the school’s website, most students are expected to be reassigned by October Break— nearly two months into the semester. At the latest, they will be moved by the semester break— in DECEMBER!

Whenever a room becomes available, those in auxiliary housing will have to pack up all of their things and move to another part of campus, as if they are moving in all over again.

In the case that a student “got lucky” and avoided the 10-person room by being assigned to a triple or quadruple room, the space is extremely tight. Instead of two individual beds, they are converted into bunk beds.

Each student has access to a desk, dresser and storage, (though not necessarily one per student) and they must share the 188 square feet of space, as well as the two closets.

Truthfully, having four roommates might be fun, at least for a little while. But the lack of space and barrack-like setup is a pretty brutal scene.

Meanwhile, Purdue is just deferring the problem by slapping on a “temporary” label. It seems like this whole thing could have been avoided by just… not accepting more students than beds?