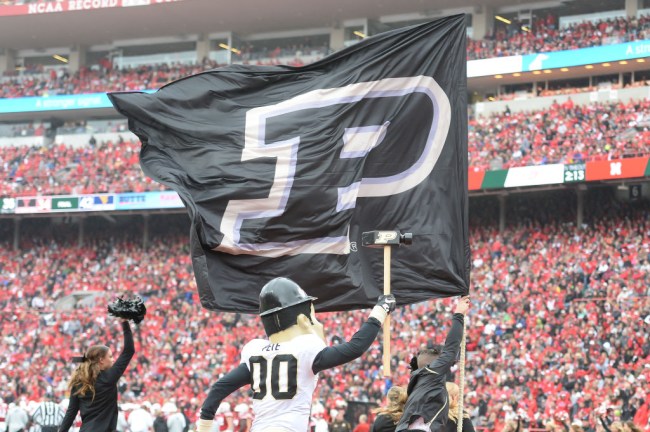 I woke up this morning hoping for a cry-free day. I have already succumbed to this story of Purdue superfan and ultimate fighter Tyler Trent. Goddamn you, Tom Rinaldi.

Tyler has been battling bone cancer for most the last several years, experiencing two years of cancer-free remission before the disease came back with a vengeance, forcing him to withdraw from Purdue University this fall and enter hospice care. He’s just 20 years old.

Tyler’s story was brought into the national consciousness by ESPN’s Tom Rinaldi, who profiled Tyler and his parents, Tony and Kelly. But to folks in northwest Indiana, Tyler has been an inspirational figure since last season when he took the field with his beloved Boilermakers as an honorary captain. After Purdue beat Nebraska on September 29th, the team stopped by Tyler’s home to deliver him the game ball.

Tyler and his family talk openly about not knowing how much time he had left and saying that Saturday’s matchup against the number 2-ranked Ohio State Buckeyes may be Tyler’s last chance to see his Boilermakers take the field.

In a suite at Ross-Ade Stadium, Tyler witnessed his team defy the 12.5-point underdog margin and wax OSU, 49-20, marking the first time a Purdue team beat a number 2-ranked opponent in 34 years. After the thousands of fans stormed the field, coach Jeff Brohm brought Tyler into the postgame locker room to address the team.

Congrats @BoilerFootball You make us proud. @theTylerTrent you willed it to happen and it did!!!! Proud to be a Boilermaker! #TYLERSTRONG

Proud to be a boilermaker. Love you family 🖤💛🚂

This is the kind of moving stuff we’re looking for for our new Bro of the Week column. If you want to shine a light on the courage, accomplishments, etc. of you or a friend or loved one, email submissions to matt@brobible.com. I will respond to you personally.