Quavo From Migos Shows Off His Ridiculous Jewelry Collection, One Of The Best In Hip-Hop 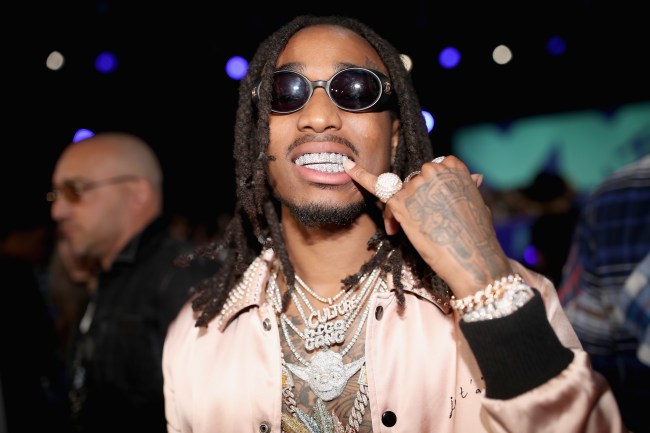 Quavo, real-name Quavious Keyate Marshall, is an Atlanta-based Rap mogul who is one of the three members of Migos (Takeoff, Quavo and Offset). But you already know this, the man’s a worldwide celebrity these days ever since his public profile has exploded in the past few years.

He’s only 27-years-old but Quavo is a self-made millionaire alongside his Migos brethren. He’s estimated to be worth somewhere around $16 million with the Migos combined net worth estimated around $50 million. That figure’s probably a little off given that Offset is shacked up with Cardi B who became one of Hip-Hop’s A-List acts last year and has been raking in the cash.

Quavo’s a stylish man. He’s a Hip-Hip icon at this point and that means dressing the part. Shopping for the rarest and most expensive streetwear/sneakers at places like A Ma Maniere in Atlanta. And dripping with ‘ice’ as he calls it anytime he steps out in public.

When it comes to ice, few rappers have a brighter collection of jewelry than Quavo Hunco. He was a guest this week on GQ‘s YouTube channel where he showed off his favorite pieces of jewelry including a prized Crash Bandicoot piece as well as his Huncho bracelet and others.

The man likes to show it off in public and he’s got the money to buy the jewels. He’s just out here having fun.

I’m not really a jewelry guy. I wear a wristwatch. But I’m still blown away by the number of diamonds found in Quavo’s jewelry collection because it’s abso-f*cking-lutely insane.