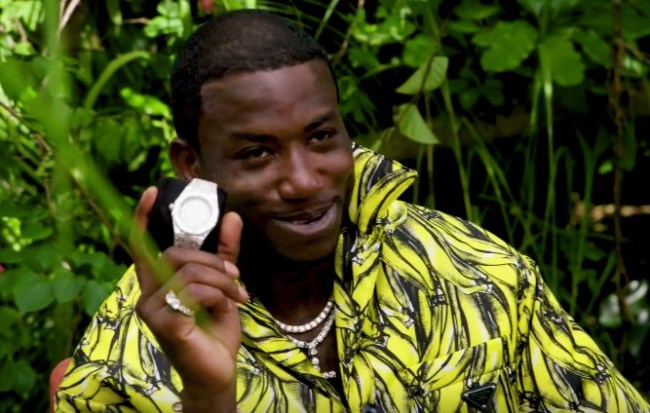 Gucci Mane is a wealthy man. He’s been a multi-millionaire for years thanks to his 12 albums and 70 mixtapes. Below, he shows off a portion of his absurd jewelry collection which is believed to be the best in the rap game according to Gucci Mane‘s peers.

His real name is Radric Delantic Davis and he was one of Atlanta’s founders of trap music alongside rappers like T.I. and Young Jeezy. He’s the fucking man. Fans know this, his peers know this.

In GQ‘s ‘On the Rocks’ where rappers show off their jewelry from chains to rings to watches, they’re often asked who has the best jewelry collection in the game. The answer’s almost always the same: Gucci Mane.

Appearing as the latest guest on On the Rocks, Gucci’s brought in a small portion of his jewelry collection to show off and he talks about how he got into the jewelry game. His dad was some sort of a hustler who used to con people out of jewelry as he says, and Gucci says he was carrying around chains from his earliest days in school when most kids had no clue what diamonds even were.

This could very well already exist, but I think a sick concept for a hi-res photography coffee table book would be iconic rappers/musicians/actors/athletes with their favorite piece of jewelry and a short blurb about that piece.

READ NEXT: Meek Mill Explains What The Hell He Was Talking About In His Viral Encounter With Gucci Mane And Robert Kraft

You could put Gucci in there with his favorite piece alongside someone like Paul Newman’s iconic Rolex. Golfers and Tennis players have their luxury watches which could fill up half the book. Make the picture as visually engaging and high-definition as possible, keep the blurb/write-up short, and I’d easily spend $50-$150 on a book like that to drop on my coffee table.

As for Gucci Mane’s jewelry collection, you can’t help but be impressed. A few websites out there have his net worth somewhere in the realm of $12 million but I imagine he has more than that in jewelry sitting in vaults. The man’s dripping in ice.

Lastly, you know I wasn’t going to let you bros out of here without sharing this track so you can get it stuck in your head for the next week: