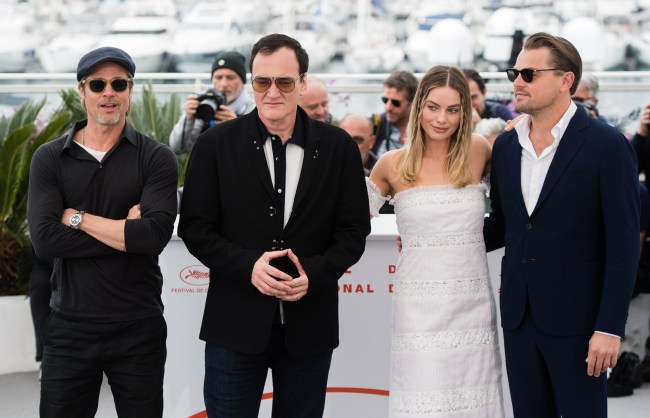 Quentin Tarantino’s Once Upon A Time In Hollywood received a 7-minute standing ovation following its world premiere at the Cannes Film Festival, with critics using words to describe it like “thrilling,” “provocative,” “brilliant,” and “hilarious.”

The praise evidently didn’t follow Tarantino up to the post-premiere podium on Wednesday afternoon, as the director was asked the tough questions about some of the choices he made in the film.

A particularly contentious exchange occurred when a female journalist from the New York Times asked Tarantino why an actress of Margot Robbie’s character was given such little dialogue in her role as Sharon Tate. Tarantino looked noticeably perturbed by the implication that he doesn’t value women in film and quickly dismissed the question before Robbie gave an insightful assessment of her character.

Quentin Tarantino snapped at a female reporter from The New York Times who asked why Margot Robbie wasn’t given more to say or do in his latest film “Once Upon a Time in Hollywood" https://t.co/xACQXjyBu8 pic.twitter.com/5GraEtaSyw

Tarantino supporters can easily point to Jackie Brown and Kill Bill 1 and 2 to provide evidence that he’s championed women in his work. Detractors will question the casting choice of Emile Hirsch, who pleaded guilty to assaulting a female executive in 2015, allegedly putting her in a chokehold from behind, dragging her across a table and body slamming her to the floor. Or the allegations made by Rose McGowan that Tarantino admitted to her that he masturbated repeatedly to footage of her feet in “Jawbreaker.”

Tarantino is not a perfect human being by any means but I think he knows a thing or two about writing strong female roles in his films pic.twitter.com/OlbqCAswBN

qu*ntin tarantino, the man you’re all obsessing over, doesn’t think sex with a minor is rape
he actively defended roman polanski
he bullied uma thurman on set and forced her into a stunt that could have killed her
why is the film community ignoring this?? where are our morals??

In a less controversial part of the discussion, Pitt and DiCaprio were asked about collaborating with each other for the first time in their careers.

“It’s that thing of knowing you’ve got the best of the best on the opposite side of the table holding up the scene with you,” Pitt said. “We have the same reference points. We’ve been going through this at the same time and have similar experiences to laugh about, and I hope we get to do it again.”

Once Upon A Time In Hollywood hits theaters in the U.S. on July 26.

Watch the whole press conference below.