Have You Ever Noticed The Two References To Quentin Tarantino In The Marvel Cinematic Universe? 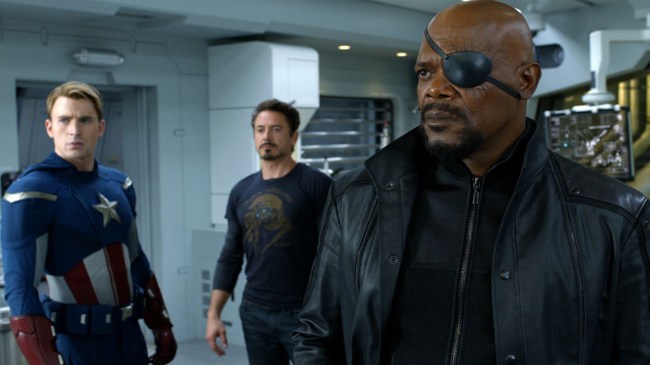 While Marvel Studios is largely credited with popularizing the “shared universe” method of filmmaking, the fact is that seminal director Quentin Tarantino has been operating in his own cinematic universe ever since Reservoir Dogs way back in 1992.

Credit to the Marvel Cinematic Universe, though, as they seem to understand this, having paid homage to the legendary Inglourious Basterds director not once, but twice during the history of the MCU.

The first Tarantino Easter Egg came in Captain America: The Winter Soldier back in 2014, as a line from the iconic bible verse in Pulp Fiction — “The path of the righteous man….” from Ezekiel 25:17 — can be seen on Nick Fury’s gravestone.

The second Easter Egg appears in Captain Marvel and is far more subtle, via ComicBook.com:

The moment in question happens in Captain Marvel when Talos (Ben Mendelsohn) shows up at Maria Rambeau’s house, just casually drinking a soda from a red and white striped fast food cup very similar to the cup Jackson’s Jules drank from in Pulp Fiction (the cup in that film was purple rather than red.) However, thanks to the directors’ commentary that’s part of the Captain Marvel digital release, the real inspiration for the shot has been revealed.

It turns out that the shot is a reference not to Jules, but to Mr. Blonde (Michael Madsen) in Reservoir Dogs. In the Reservoir Dogs scene, Mr. Blonde is scene drinking a soda — also in a red and white striped cup — with a sort of chill, nonchalant posture and pose. It’s a similar pose to what Talos has in the Captain Marvel scene. [ComicBook.com]

Tarantino himself is the fan of the winks and nods, telling BBC Radio 1’s Ali Plumb that it felt “pretty good” to notice homages to his work:

“Probably the first commentary I ever read was the Stan Lee ‘Soapbox’. All of a sudden, my universe was now being quoted inside a gate as closed as the Marvel Cinematic Universe, it felt pretty good,” Tarantino said. [IndieWire]

Well, it seems like we’ve got a good ole fashioned love affair between Tarantino and the Marvel Cinematic Universe.

You know what that means… right? Let the man direct the Wolverine reboot!!! Or the Fantastic Four reboot! Honestly, let him get his hands on anything in the MCU? Who says no (other than Disney)?!