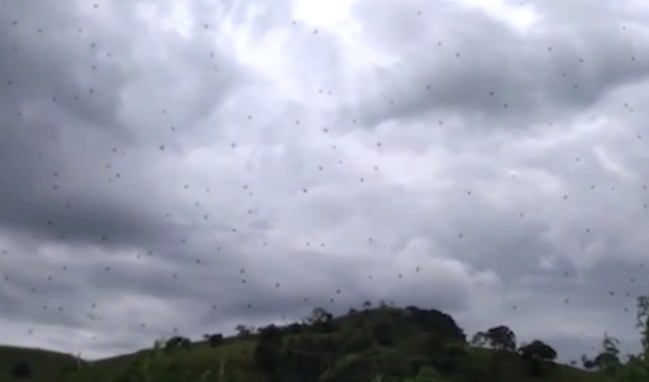 If you have a healthy fear of spiders then this might be your worst nightmare. Footage is circulating of ‘raining spiders‘ in Brazil and it’s about as creepy as anything you can think of in the natural world.

What’s even more frightening is this is apparently a somewhat regular occurrence in the Minas Gerais state of Brazil where this footage was taken. The hot and humid climate is a perfect breeding ground for these spiders whose webs are so fine they’re almost impossible to see with a human eye. They build these cloud-sized spiderwebs which trap prey in the air.

We spend so long exploring our case studies in #geography that they often become dream destinations to visit. Is that still the case for Brazil where there are reports of “airborne arachnids”?! #rainingspiders

Having lived in Florida for much of my life, I can put up with the heat and humidity with relative ease. Throw in clouds of spiders and I’m fairly certain I’d be moving to Alaska the next day.

João Pedro Martinelli Fonseca, who filmed one of the most widely shared clips, was traveling with his family to his grandparents’ farm in Espírito Santo do Dourado, about 250km north-east of São Paulo, when he realized the sky was covered with black dots.

He told a local newspaper that he was “stunned and scared” – especially when one of the spiders fell through the open window.

The boy’s grandmother, Jercina Martinelli, told another local paper: “There were many more webs and spiders than you can see in the video. We’ve seen this before, always at dusk on days when it’s been really hot.” (via Guardian)

I have to think that if it wasn’t for the English-Portuguese language barrier we’d see some of the most batshit crazy news in the world coming out of Brazil on a regular basis. With the heat and humidity, Amazon jungle, and millions of deadly species, they’ve probably got some of the craziest news stories around and we’re just not hearing about them because the English-language news doesn’t care enough to translate. I could easily be wrong about this but I’ve got a hunch that it’s a treasure trove of WTF news.