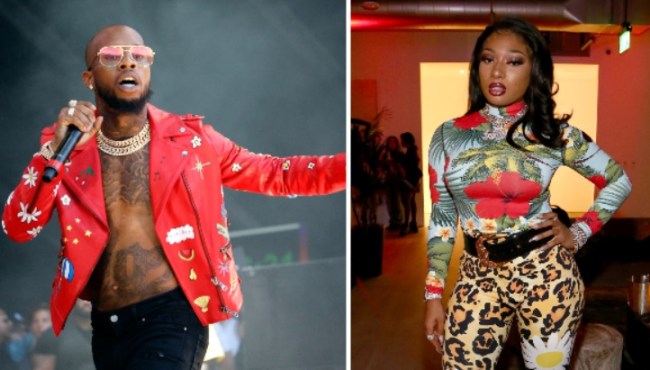 Rapper Tory Lanez appears to be in serious trouble with the law.

Earlier this week, Lanez was arrested for gun possession while he was riding around with Megan Thee Stallion.

Tory Lanez got busted after an alleged argument outside a house party led to cops finding a gun in his car, and Megan Thee Stallion was there too … this according to law enforcement.

We’ve learned police got a call of a disturbance outside a Hollywood Hills residence around 4:30 AM Sunday. When officers arrived, we’re told witnesses reported people were arguing in an SUV before someone fired shots in the air … and the vehicle took off.

Megan later revealed that she had been shot in the foot on the same night that Tory was arrested.

According to the NY Post, Lanez was caught on video shooting Megan and the police are investigating the matter.

Tory fired the shots from within the vehicle while Megan was outside trying to leave,” a source exclusively told us on Thursday. “There is video and the police are investigating. This is a case of a man physically harming and abusing a woman.”

Police have yet to confirm or deny the Post’s report.

“The detectives are seeking information regarding the shooting involving Daystar Peterson, and the investigation is still ongoing. I’m not privilege to what the detectives have right now,” the spokesperson added. Police would not say whether Lanez is a suspect.