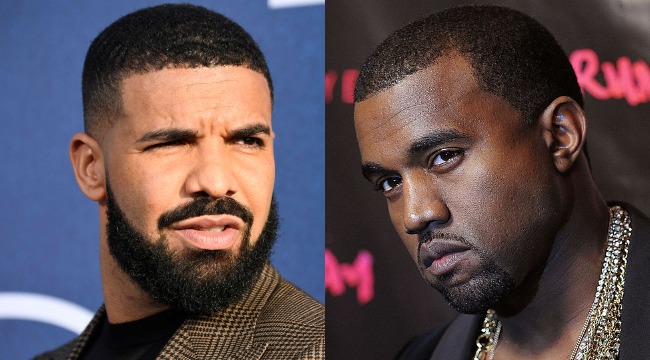 In the lead up to their impending album releases, I can’t imagine a beef between Kayne and Drake is bad for business. Contoversy sells and chalk up the timing of the latest installment of their long-enduring feud as coincidence is to undermine the marketing genius of two of the most influential artists of our generation.

Things between the two have soured immensely since May 2009 when Drake publicly idolized Kanye: “I’d even go as far as to say he’s the most influential person as far as a musician that I’d ever had in my life,” he said at the time.

Where did it go wrong? Was it Drake hanging out with Amber Rose two months after her and Kayne broke up? Was it Drizzy’s verse being cut from ‘All of the Lights‘? Was it Kanye pursuing a joint album with Jay-Z after Drake announced a joint album plan with Lil Wayne? Was it Drake trashing the Yeezy 350s in an unreleased collab with French Montana?

Whatever it was, it still is.

Most recently, Drake is featured on Trippie Redd’s latest album Trip at Knight, with a verse on a song called “Betrayal” that takes shots at West and Pusha T.

Kanye then posted a now-deleted Instagram screenshot from a group chat containing eight other people, including Pusha T and presumably Drake.

“I live for this

You will never recover

Just to make sure everyone’s following along so far…

"So Drake reignited his 2018 feud with Kanye by dissing him on Trippie Redd's new album. Then Kanye sent Drake a photo of the Joker and added Pusha T to a group chat with Drake" pic.twitter.com/hjJZT3Dd5Z

In another since-deleted post, Ye shared the address to Drake’s Toronto mansion, which would be considered doxing if the address already wasn’t widely known.

It’s 1 AM and Kanye West was trying to doxx Drake. Shit is getting real weird out here. pic.twitter.com/nVMFDXuphE

Drake got a kick out of this.

Drake laughing at Kanye West for tweeting his address pic.twitter.com/hdN5anSfF9

That is where we stand right now. You are hip to the uptake.

“Kanye West is entering his joker era he’s just like me” pic.twitter.com/CThzYAdibU

Drake gon check his security cameras and see Kanye in his front yard like pic.twitter.com/8pkQM4cWrO

Kanye West really sat in here this morning and used his phone to Google the words “Joker 2019 reaction image” and send it to Drake 💀 pic.twitter.com/bsz7PRjO0k

Kanye about to be at Drake’s door like
pic.twitter.com/MrxeNYxhsL

Drake gon have Kanye posting shit like this in a few days pic.twitter.com/pkBJXdir6K

This who was in Kanye’s groupchat that he added drake and pusha to pic.twitter.com/9t0hb8GUwW

This is the only acceptable way for Drake and Kanye to settle things#CrateChallenge pic.twitter.com/TgAyc3CDnb

Drake when kanye added pusha T to the convo pic.twitter.com/OezdOqccMs

Trippie Redd watching his streams go up from the Drake and Kanye beef pic.twitter.com/EsyS8WTCv4

drake and kanye after both their albums get mad attention because of the beef: pic.twitter.com/9vRfpxjp3D