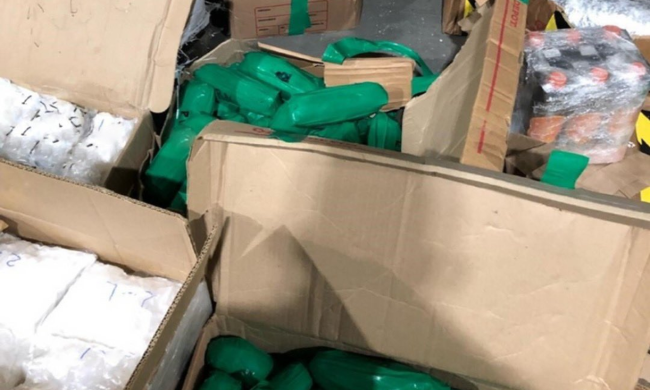 According to a complaint filed by the U.S. Attorney’s Office – Southern District of California against a man named Carlos Martin Quintana-Arias, on November 18, 2021 at approximately 8:18 p.m., he applied for entry into the U.S. as the driver and sole occupant of a 2009 Kenworth Tractor pulling a 1996 Stoug trailer.

That’s because the commercial trailer he was attempting to gain entry into the United States with at the Otay Mesa, California, Commercial Port of Entry just happened to be filled with a record breaking amount of drugs.

“Quintana-Arias’ manifest reflected the trailer contained automotive body parts. However, according to the Complaint, an X-Ray machine detected anomalies inside the trailer and a drug detection dog alerted to the rear door of the trailer,” the U.S. Attorney’s Office said in a press release.

Related: Over $2 Million In Fentanyl And Cocaine Seized By Customs Agents At Texas-Mexico Border

U.S. Customs and Border Protection (CBP) confirmed that both drug seizures were the largest in each drug category, for both this year and last year, in the entire United States.

“This is a staggering seizure that demonstrates the extent of our current fight against mass production of methamphetamine and fentanyl. But for the vigilance of our law enforcement partners, this record-breaking deluge of drugs would have caused incredible damage in our communities.” said Acting U.S. Attorney Randy Grossman. “We commend our partner agencies for their tireless work and dedication to preventing these dangerous and deadly drugs from entering our country.”

This record-breaking meth and fentanyl seizure is thanks to incredible work by our @CBP personnel. This successful interception is the result of a great collaboration of agencies working jointly to combat transnational crime organizations. https://t.co/GO6AmISSYQ

“This record-breaking commercial seizure exemplifies the joint efforts of CBP and HSI employees, who work tirelessly each day to protect our Ports of Entry from the threats posed by drug cartels and other transnational criminal organizations,” said HSI San Diego Special Agent in Charge Chad Plantz. “Countless lives will be saved because of this historic seizure of methamphetamine and fentanyl, but make no mistake: drug cartels strive to exploit our borders to further their criminal enterprises every day. The HSI Border Enforcement Security Task Force and the San Diego Imperial Valley High Intensity Drug Trafficking Area task force, in collaboration with CBP, remain vigilant in the mission to disrupt and dismantle every level of the cartels.”

Quintana-Arias was charged with Importation of a Controlled Substance and now faces a maximum penalty of life in prison with a mandatory minimum of 10 years in prison, and a fine of up to $10 million.