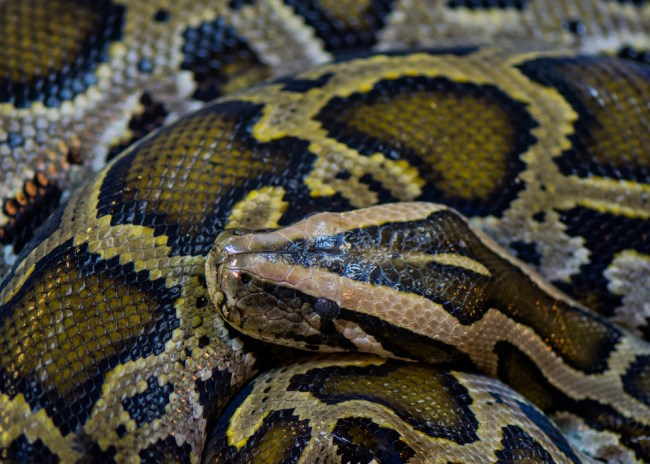 Snake hunters in Florida get paid for each invasive python they turn into the state. They get paid $50 for the first 4-feet and an additional $25 for each foot after that. So a 10-foot snake would be $50 for 4-feet and $25 x 6 for the additional 6-feet. That can make for a decent payday if this is your hobby, and clearing out invasive species from The Everglades is noble work.

One snake hunter from South Florida just set a record. He brought in a MASSIVE Burmese Python. If you can’t tell by that name, Burmese Pythons are native to the region of Myanmar (Burma), and not The Florida Everglades. But these snakes have been breeding like rabbits and growing faster than anyone can keep up with. This particular snake hunter’s record snake measured over 17-feet-long (17ft1in) and was said to be so large it could easily eat a fully grown adult male. This was the longest snake ever captured in Florida’s Python Elimination Program:

Invasive python species have absolutely flourished in numbers in recent years despite efforts to stop that from happening. Scientists really have no clue how many of these invasive pythons there are in the state of Florida. The snakes really only show themselves in the colder months of the year, which in Florida is like 2 or 3 months at best. When the temperatures drop the snakes will come out to seek warmth from the sun, or find asphalt roads to bask in the warmth. Scientists have to swoop in and snatch them up then.

There are estimates that biologists can only account for a tiny fraction of the total number of pythons in Florida. They’ve already found pythons in north Florida, evidence that the species can flourish outside of The Everglades and South Florida. This is pretty disturbing news for someone like myself who literally lives adjacent to a multi-acre bird sanctuary in Florida that’s full of lakes and snakes that feed on the birds, frogs, and insects.