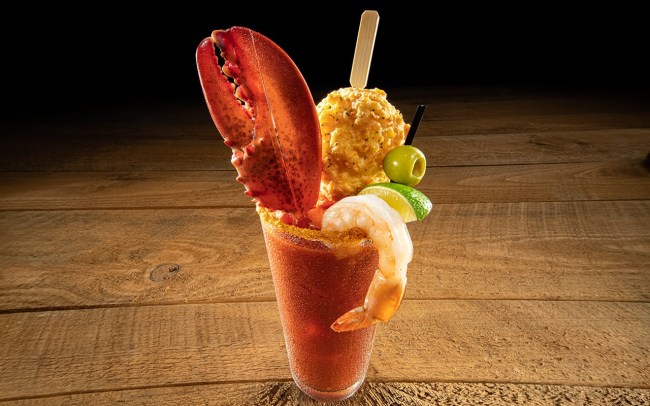 When it comes to intriguing flavor combinations, I’m a big believer that less is more. All you really need to make a steak taste good is salt, pepper, and garlic. And most cocktails – from a gin and tonic to an Old Fashion – really only require a ingredients to be considered palatable and “good.”

Bloody Marys are the pretty big exception to the rule. Good Bloodys require an insane concoction of ingredients. If you make a solid Bloody from scratch, they’re kind of like snowflakes – no two Bloodys really every taste the exact same. That’s why I love build-your-own Bloody Mary experiences like the one at The Starboard in Dewey Beach, home to the world’s most ambitious DYI Bloody Mary bar. You name an ingredient – from Old Bay to a dozen different kinds of olives – The Starboard (probably) has it.

Red Lobster is throwing its hat in the ring, adding a new seafood-inspired bloody to the menu for a limited time.

According to Red Lobster, it’s made with Tito’s vodka and Red Lobster’s house Bloody Mary mix. Then it gets interesting: One shrimp, a big lobster claw, a lime wedge, and a spicy chipotle BBQ seasoning on the rim.

I’ve had plenty of Bloodys with cracked crab claws and they’re always delicious.

But here’s the game changer: A famous Red Lobster Cheddar Bay biscuit, on a skewer.

The drink is available nationwide until February 2, so perfect reason to get out of the house and spice things up during the winter doldrums.

Brandon Wenerd is the publisher of BroBible.com and one of the site’s founding partners. He can be reached at brandon@brobible.com. Tweet him your Bloody Mary hot takes here.