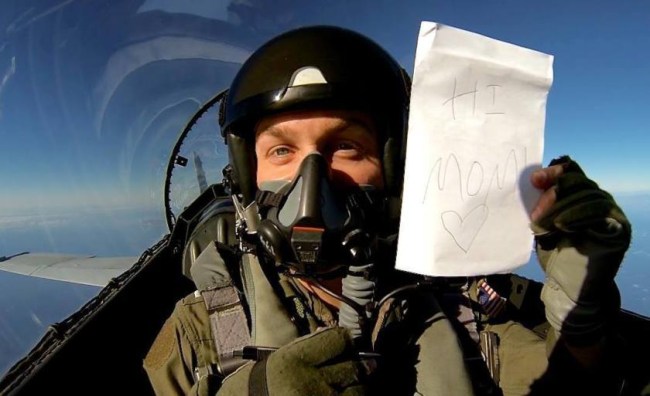 Editor’s Note: We originally published this remembrance of Lieutenant Nathan Poloski in September 2014, a few weeks after he died in an accident on the Pacific. In honor of Memorial Day and remembering all those lost in brave service of our country, we’re republishing it again. Pour one out today, Bros.

On Saturday, while I was watching the WVU-Oklahoma game at a bar with a friend, an e-mail from a reader landed in our inbox.

The loss of a Bro — and any human being, really — is an awful thing to hear. Originally from Lake Arrowhead, California, Nathan was 26, just out of flight school, and flying F-18s aboard the U.S.S. Carl Vinson, a San Diego- based aircraft carrier. He was a 2009 graduate of the U.S. Naval academy, joining Strike Fighter Squadron 94 in April.

Around 5:40 p.m. on Thursday, September 11th, two F/A-18C Hornet jets crashed during a training exercise in the Pacific Ocean. One pilot ejected from his aircraft and was recovered to the USS Carl Vinson. The other F-18, piloted by Lieutenant Nathan Poloski, was never recovered. After an exhaustive 36-hour search, Nathan’s body was missing and he was presumed dead. The accident is nothing short of a tragedy.

While none of us here at BroBible knew Nathan, every person who reads this site most definitely knows someone like Nathan. He wore Chubbies, liked a cold beer, was probably a social animal, probably chased women around Pacific Beach on the weekends, and definitely had a genuine sense of adventure. He was just one of the boys, like you and me and your friends and every other person on the planet who has ever identified themselves as a Bro, in one way or another.

The Navy has identified the pilot killed in a fighter jet crash as Lt. Nathan Poloski, 26. http://t.co/21Ainkuh7t pic.twitter.com/zIksWt1tA9

But what made Nathan different from being just another Bro is that he was a warrior with a profound patriotic duty and service. It takes balls and brains that a lot of us will never have to jump in a fighter jet and fly it for Uncle Sam. To have the skills and sense of bravery to do such a thing is rare in a human being. Driven by that deep sense of duty, he endured years of training and flight school to do so. Unlike us cubicle jockeys who make stupid, insignificant comments on Twitter or Facebook all day long, Nathan was willing to make the ultimate sacrifice for his country.

Gone too soon, his life was a life of passion, patriotism, honor, and courage. His example of those values is something we can all learn from.

The tribute on the military aviation blog Fighter Sweep nails what it’s like to mourn the loss of a warrior stranger:

I did not know Nathan Poloski, but I know his type. He was a young man, just 26, undoubtedly full of motivation and desire. If I know anything, I know he was excited to finally hit the Fleet; he joined the Mighty Shrikes just a brief four months ago in April – after a long slog through flight school and the RAG.

I know that he was fired up to finally be part of the team, to join his brothers and sisters as they sailed off to play their poignant part in history. I know that there is another pilot sitting safe on Vinson who is wracked with survivor’s guilt and shame, though there is nothing to feel guilty about or be ashamed for. I know that there is a proud squadron, men and women, enlisted and officers, who are suffering a deep sadness and shocking sense of loss.

There is a hole in their hearts that will not heal soon–perhaps ever. They will remember Nathan and toast him forever whenever two or more are gathered with drinks in hand. I know for sure that there is a family grieving at home. People who loved Nathan more than their own breath, who have been brought to their knees with shock and pain and disbelief. The hole in their hearts will certainly never heal.

I didn’t know Nathan personally, but there’s a good chance he whooped into his mask as the catapult stroke shot him off into the cloudless sky. I know that as he raised his gear and accelerated over those beautiful blue waters he was full of life and purpose. His mind was focused on the future. On the rendezvous with his lead, on that day’s mission, on that deployment, on how great it was to be flying at that moment.

Last year, I flew to San Diego for Comic Con. The annual nerdapalooza takes over the entire city, making for a sensory overload that’s downright overwhelming: Cosplayers dressed as zombies live out their nerd fantasies and the fanboys who wander the floor of the Convention Center smell like stale pizza farts and Gatorade sweat. I was over it after a day or so and called up a high school buddy who’s a Naval pilot, stationed in San Diego at the time. Happy to get away from the Comic-Con clusterfuck, we spent a Saturday downing Coors Lights and Red Bull vodka slushie “TO THE FACE” at PB Shore Club with his fellow fighter pilot buddies. No hyperbole, it was a nothing short of an epic afternoon.

If you ever get a chance to hang with a bunch of fighter pilots, do it; They are the ultimate badasses, with swagger and bravado that comes from being able to operate a fighter aircraft at speeds two-times the sound barrier. They somehow collectively manage to say “Bro” more in an afternoon than I’ve ever said “Bro” in my life and I’ve worked at BroBible for over five years. Their stories about turning on afterburners, getting yelled at by salty old flight instructors who “have seen some shit, Bro,” and landing on aircraft carriers didn’t make a lot of sense to simpleminded civilian folk like myself, but, holy shit, was it something to listen to. The size of their cojones is truly medicine ball-esque.

The best part is the incredible grace that they’re able to go between shop-talk about some wonky tactical flight maneuver to offering a group of giggling SoCal blondes Fireball shots in the same swift breath. And then, during the small talk about “what do you do” with said courting partner, they drop the “I’m a fighter pilot” line. At first the reaction is “I don’t believe you” but then after some convincing the backstory is legit, it’s swoon-city.

No one — Hollywood celebrities, rockstars, professional athletes, kings of industry, the frattiest of fratstars — has game remotely close to their level. I hate myself for making such a cliche observation, but it really was like observing scene after scene from Top Gun in real life. I guess the cliche exists for a reason:

Navy pilot Nathan Poloski, whose plane went down over the Pacific, had zest for life http://t.co/EHVWb7K2fu pic.twitter.com/Kwxptz8grF

Our Navy fighter pilots defending our freedom are true Bros in the highest form. And they will out-Bro every single person who has ever read BroBible, I promise.

When that e-mail from a reader ended up in my inbox on Saturday night, I thought back immediately to that afternoon. Was Nathan there on that beautiful afternoon? I’m 60% sure he was and we drank beers together on roof deck of the Pacific Beach AleHouse. I vaguely recall discussion about him getting “off the boat.” Was my buddy close to him? I fired off an e-mail pretty quick: “You know about this?”

“Yea man. He was a good friend of mine. Total bro would be an accurate description. “

Pour one out tonight for Lieutenant Nathan Poloski, total Bro, men. Our deepest condolences to the Poloski family.