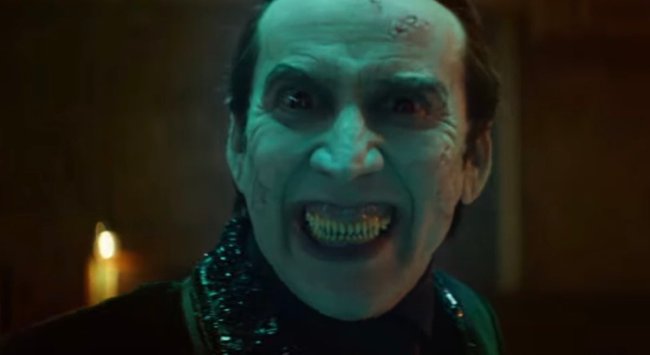 The first trailer Universal Pictures’ for Renfield, which stars Nicolas Cage as Dracula, has been released. Check it out below.

In addition to the Oscar-winning Cage, Renfield — directed by The Lego Batman Movie and The Tomorrow War filmmaker Chris McKay — stars Awkwafina, Ben Schwartz, and more. Renfield hits theaters in the United States on Friday, April 14.

Here’s the official synopsis for Renfield, via Universal Pictures:

In this modern monster tale of Dracula’s loyal servant, Nicholas Hoult (Mad Max: Fury Road, X-Men franchise) stars as Renfield, the tortured aide to history’s most narcissistic boss, Dracula (Oscar winner Nicolas Cage). Renfield is forced to procure his master’s prey and do his every bidding, no matter how debased. But now, after centuries of servitude, Renfield is ready to see if there’s a life outside the shadow of The Prince of Darkness. If only he can figure out how to end his codependency.

When we interviewed Cage last spring ahead of the release of The Unbearable Weight of Massive Talent, he said that his performance as Dracula is largely inspired by his father.

In addition to Renfield, Cage will also star in the Western film The Old Way.

RELATED: Nic Cage Is Officially BACK As Reports Indicate He’s Once Again In-Demand And Has Raised His Fee By Millions Of Dollars