WATCH: Nicolas Cage Shares A Sneak Peek Of The Inspiration For His Dracula Voice In ‘Renfield’ (Exclusive) 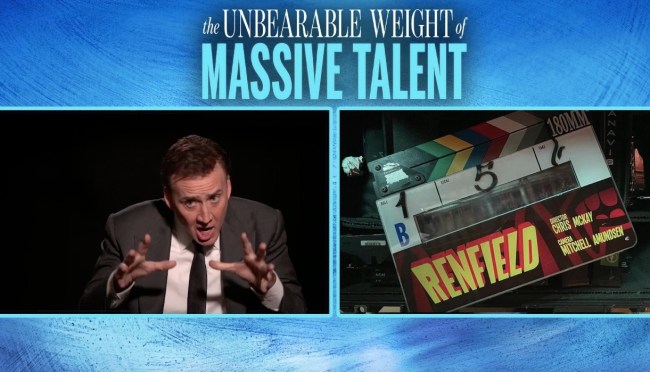 Following the widespread praise of his performance in the 2021 drama Pig — a film he considers to be his best — and the career-best reviews he’s receiving for The Unbearable Weight of Massive Talent, which boasts an impressive 100% Rotten Tomatoes score after 27 reviews, 58-year-old Academy Award winner Nicolas Cage is undoubtedly in the midst of a career renaissance.

After a decade or so churning out seemingly endless B-list and indie movies — as a debt payment strategy he recently addressed in a wonderful GQ profile — Cage is now squarely back in the big-budget, studio filmmaking machine as he not only stars in Lionsgate’s action-comedy The Unbearable Weight of Massive Talent alongside Pedro Pascal but will also portray the legendary Count Dracula in Universal’s blockbuster Renfield next summer.

During a recent interview with BroBible’s Post-Credit Podcast, Cage teased how his performance as Dracula is inspired by his late father August Coppola, and shared what could be a tease of what his version of the iconic vampire will sound like.

Nicolas Cage on how his performance as Dracula in #Renfield is inspired by his late father (and a sneak peek of his Dracula voice?)🧛🏻‍♂️#MassiveTalent hits theaters on April 22 🍿 pic.twitter.com/4kghmK5KP0

As for Renfield, the Chris McKay (The Lego Batman Movie) directed project is dated to release on April 14, 2023. In addition to Cage as Count Dracula, the film stars Nicholas Hoult in the titular role of Renfield, Awkwafina as Rebecca Quincy, and Ben Schwartz as Teddy Lobo.