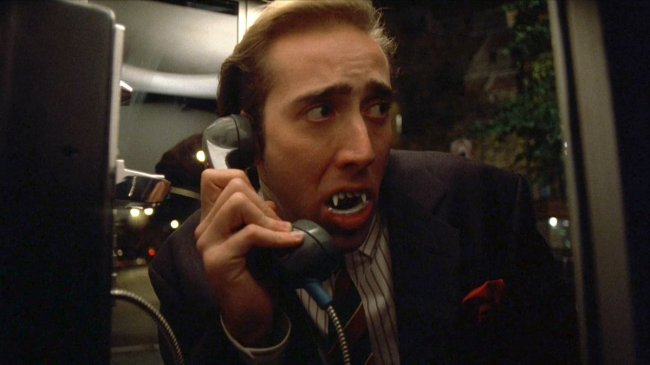 Remember at the end of Bad Boys 2, when Marcus saves Mike Lowry’s life by dome-piecing Johnny Tapia on the beaches of Guantanomo Bay, and Mike Lowry yells “NOW THAT’S HOW YOU SHOOT!” That basically summarizes how I feel about Nicolas Cage being cast as Dracula in Universal’s upcoming action-comedy Renfield, which will also star Nicholas Hoult as the titular Renfield, Dracula’s henchman.

The film, which is the latest in Universal’s modern updates of their classic monster movies, will be directed by Chris McKay, who helmed this summer’s Chris Pratt-starring action sci-fi The Tomorrow War.

In the original Dracula novel, R.M. Renfield was an inmate at a lunatic asylum who was thought to be suffering from delusions but actually is a servant of Dracula. Plot details of the movie weren’t announced, but it’s believed to take place during the present day and is not a period piece. [Deadline]]

As the Deadline report states, while plot details are being kept under wraps, the film will reportedly be an action-comedy set in modern day.

The casting is the latest step in the Academy Award winner’s career renaissance, as the project marks Cage’s first proper studio movie — not counting animated films such as The Croods franchise and Spider-Man: Into the Spider-Verse — since 2016’s Snowden. Cage could also have an outside shot at an Academy Award nomination this year due to his simply fantastic performance in Pig.

RELATED – I Am Here To Confirm That The Rumors Are True: Nicolas Cage’s ‘Pig’ Is An Excellent, Beautiful Film

Nicolas Cage gives me the best birthday present EVER!! https://t.co/iw34G8Yx8M

And thrilled to see Nic Cage back in a studio movie.

The Dark Universe had to die for this beautiful thing to exist. https://t.co/JJDZ1XAdxP

There's nothing in this headline I don't love. https://t.co/hkvLKV9gxs

i don't see how he could possibly do better than his previous portrayal of vampirism but i can hardly wait to see him try! https://t.co/6mJByKtrdi pic.twitter.com/0aYhDS88oY

It took a while but 2021 is finally starting to turn around https://t.co/do69yJODVI pic.twitter.com/KbxztsM7S8

You got it all wrong. It’s : Dracula to play Nicolas Cage in Universal’s monster movie

Did I… manifest this? https://t.co/oKtYxOpKKM

Cage will next star in 2022’s The Unbearable Weight of Massive Talent, which will see the famously committed actor star as *himself* — forced to recreate some of his most iconic roles to save his family from a deranged drug dealer — alongside Pedro Pascal and Tiffany Haddish.