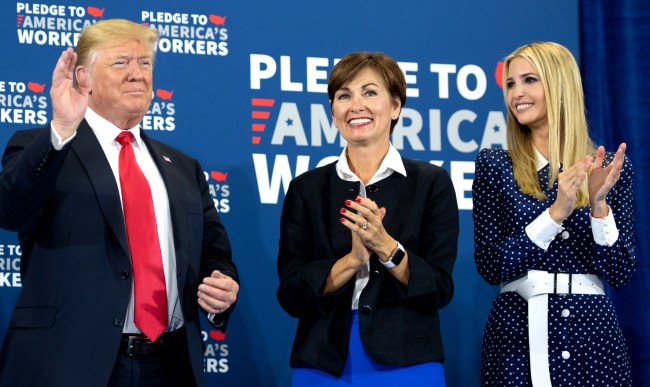 States such as Iowa, Nebraska and Texas, which are planning to be the first to order people to go back to work, say anyone who doesn’t return to their job, even if they are still (rightly) concerned about getting infected or spreading the coronavirus, will lose their unemployment benefits.

“If you’re an employer and you offer to bring your employee back to work and they decide not to, that’s a voluntary quit,” Iowa Governor Kim Reynolds (pictured above) announced. “Therefore, they would not be eligible for the unemployment money.”

Considering over 70% of Americans say they won’t even watch sports in person until there’s a coronavirus vaccine, there are going to be a lot of citizens still being very trepidatious about returning to their jobs in the coming weeks.

Reynolds also said employers who have workers that refuse to return to their jobs when the state opens back up on May 1 should file a report with Iowa Workforce Development, reports The Hill.

77 of Iowa’s 99 counties will be affected by Reynolds’ relaxing of social distancing practices.

“In the 77 counties, the proclamation permits restaurants, fitness centers, malls, libraries, race tracks, and certain other retail establishments to reopen in a limited fashion with public health measures in place,” Reynolds said in a statement.

Iowa Workforce Development says Iowans who refuse to return to work when their employer reopens will lose benefits except for in certain circumstances. @IowaPublicRadio pic.twitter.com/o1snUgyYEi

Similar measures are being enacted in Texas as well with the Texas Workforce Commission stating that people who choose not to return to their jobs when social distancing rules are relaxed on May 1 will also become ineligible for unemployment benefits.

According to the Texas Tribune, Cisco Gamez, a Texas Workforce Commission spokesman, says the agency is “developing parameters for what might allow Texans to continue qualifying for unemployment insurance if they refuse to return to work at a business reopened by Gov. Greg Abbott’s loosened executive order because they fear contracting or spreading the coronavirus.”

Nebraska Governor Pete Ricketts is also letting restaurants open dining areas and allow hair salons, barbershops and other close-contact businesses to reopen on Monday in 59 of the state’s 93 counties, including the Omaha metro area, reports Omaha.com. He also lifting restrictions on health care providers to do elective surgeries and procedures and permitting weddings, funerals and religious services to be held statewide.

The Nebraska Department of Labor reminded workers that not going back to work when called could be considered fraud. Workers who refuse to work out of fear of infection, unless they have a doctor’s note, would be considered to have quit without good cause. That would make them ineligible for unemployment benefits.

On Thursday, it was announced that the number of Americans who have now filed for unemployment has reached 30.3 million after another 3.8 million people filed claims last week.

The numbers in our area have risen daily. Will @GovAbbott be accountable for these death sentences he’s handing out?

In the mean time, Market Watch reports that some of the tens of millions of Americans who are still waiting for their stimulus checks will have to wait another 20 weeks, according to the House Ways and Means’ timetable, as the IRS is sending the checks out at a rate of 5 million per week.

Certainly, that will have some effect on the number of people that return to work, against their best judgement, as more and more states begin to lift their social distancing restrictions.

People are not happy…

#RealReliefNow My state, Iowa, shouldn't be forcing people to return to work, especially at meatpackers, or give up their unemployment. Workers with comorbidities will die to try and feed their families. Taking temps=useless. ASYMPTOMATIC

Yesterday, the Iowa governor said employees who "fail" to return to work b/c of "fears of catching the virus" will lose unemployment support, forcing most vulnerable to take great risks for her failure to address crisis

So if you refuse to return to your “job” b/c of unsafe practices, you will lose your unemployment benefits. So if the Governor says back to work than you supposed to go back to work. #Iowa #Nebraska #Covid19