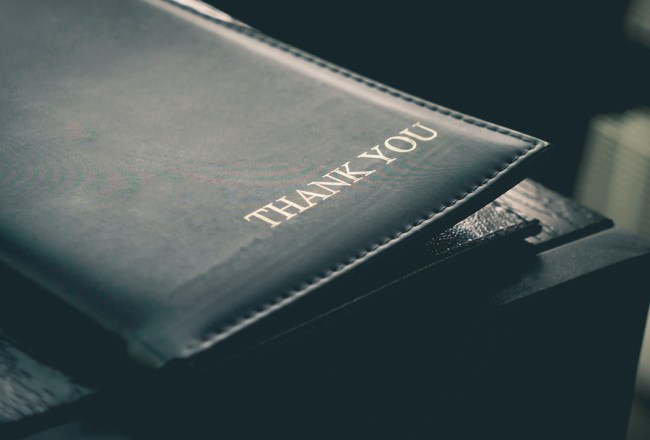 This year hasn’t been easy for many professions but people in the service industry have been hit especially hard.

In most states, restaurants were forced to move tables outside and cut indoor capacities to 25%. Some restaurants didn’t survive the shutdown, leaving many people out of work.

For these reasons, patrons have been a little more generous with tips. Donnie Wahlberg left a $2K tip on a $35 lunch bill,  a pastor gave a pregnant waitress a $12K tip because she couldn’t afford a place to live, and this customer left a $3K tip on a $7 beer.

Those feel-good stories about big tippers all have a happy ending for waitresses but this tale out of Texas is a load of bull – at least for now.

Here’s what happened, according to news station KVUE.

Emily Bauer has been a server for about two weeks at Red Hook Seafood and Bar in San Antonio. She was scheduled for a busy Sunday shift and couldn’t keep up with the fast pace of the day.

She was working all her tables but kept apologizing to one man seated in her section for “being slow.”

Bauer said the man was incredibly understanding about the situation and mentioned that he owned restaurants so he knew how hard it was to be a server.

Eventually, the man canceled his order but asked for the canceled ticket.

Bauer didn’t notice until the man left that he left her a $2,000 tip on a bill of $69 and wrote a note that said, “Merry Christmas! Keep working hard!”

Even when people are trying to do good, it gets thwarted. Shame on this #Texas restaurant for not taking care of its workers. Let's help get this waitress her $2,000 tip for the holidays! @KVUE @pulte @mcuban https://t.co/zIN55T4yqd#holidayspirit #helpingothers

“I was like, ‘Oh my God. I’ve never had a Christmas where I’ve been able to like splurge on them.’”

Unfortunately, the restaurant is playing Scrooge with the cash.

The Red Hook Seafood and Bar informed her that they “couldn’t process a tip larger than $500.”

Her fellow servers jumped in and suggested that the restaurant give her four separate tips totaling $500. The restaurant refused.

KVUE reported that the customer was contacted about the issue and that Bauer won’t get the tip. The unknown customer expressed his disappointment in the situation.

Bauer asked the restaurant for his contact information so she could at least thank him. The restaurant refused.

“Even though I can’t receive it, thank you. Thank you for having such a big heart,” Bauer told the news outlet.

KVUE called Red Hook Seafood and Bar about the incident. The venue refused to comment.