Pastor Surprises Pregnant Waitress, Who Couldn’t Afford A Place To Live, With $12,000 Tip 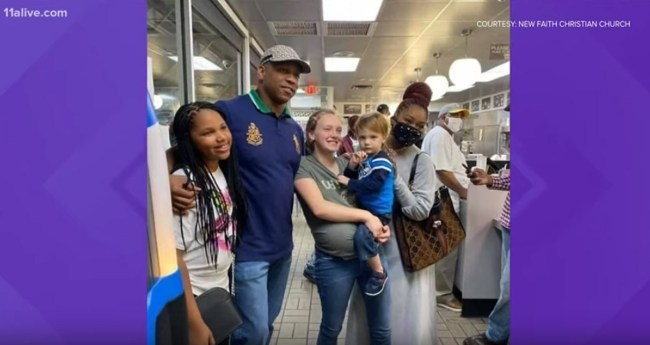 In news that proves not everyone in the world is awful, Hannah Hill, a pregnant Waffle House waitress, got the surprise of a lifetime when a pastor she had recently served showed back up at the restaurant with a life-changing $12,000 tip.

“She was so nice over the telephone, and when I got there I paid for my food and I told her to keep the change,” said Bishop Eusebio Phelps, the pastor at New Faith Christian Church in Stockbridge, Georgia.

“And then when I looked at her, I asked if she was pregnant – she said yes so at that time I was just really urged to give her the rest of the money that I had in my wallet, which was around $40. And so I gave her the $40 and I told her that I just wanted to be able to bless her so she could buy something for the baby.”

Another tie that bound the two of them together is the fact that Hill told Phelps she is planning to name the baby Samuel – the same name as Phelps’ son who died seven years ago.

“We lost our son Samuel seven years ago in Atlanta,” said Phelps. “It’s coming up on the anniversary. I went home, I told my wife what happened… my wife and I were talking, I was like, ‘Listen I wanna raise a thousand dollars to give to Hannah so she can buy whatever she needs for the baby.'”

Turns out he was able to do even more than that.

When Phelps went to deliver the money to Hill at the Waffle House she wasn’t there. It was her night off.

WFAA News reports that at the time Hill was asleep in a car and had her phone turned off.

Eventually, someone was able to reach Hill and when she woke up she had hundreds of messages on her phone.

“I was asleep in the car and my mother-in-law called and said ‘You’ve got to get down to the Waffle House now,'” said Hill.

Then as Phelps, who was broadcasting the surprise on Facebook Live, someone said “let’s raise $10,000.”

So, as Hill made her way to the restaurant, about 40 minutes away, donations kept coming in, eventually reaching $12,000.

Hill, who is just a few weeks away from her due date, says she’s been living with her mother apart from her child’s father because they couldn’t find a place they could afford.

Now, with this $12,000 tip, she will be able to get a car and a place to live with her child’s father. On top of that, the church is going to help her with child care for a year.

“You gotta show the love of God to people you come into contact with, and it was her kindness – she was so kind and so pleasant, she’s just a real sweetheart,” said Phelps. “And that touched my heart. And I feel like the Lord has really allowed our paths to cross.”

Phelps also added that they are still taking donations on Cashapp at the church account $newfaithatl and on the New Faith Christian Church account on Giftify.