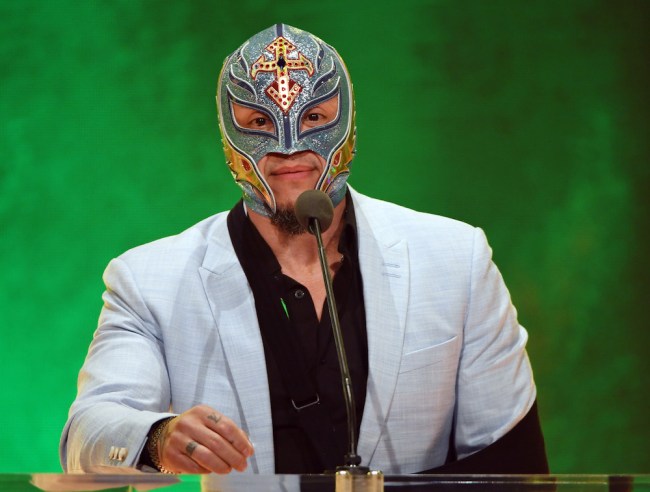 Last night at “WWE Extreme Rules: Horror Show”, Seth Rollins and Rey Mysterio faced off in the first – and hopefully last – “Eye for an Eye” match.

The only way a performer could win the match was to yank his opponent’s eye out.

Seth Rollins came out on top – unless you hold the vomiting against him – and took out Rey Mysterio’s eye on the metal ring steps. More on Rollins’s vomiting schtick in a bit.

The match itself was entertaining – Rollins has always been a solid in-ring performer and Mysterio is one of the greatest wrestlers of the last few decades. Rey’s ring gear even reads G.O.A.T and everyone knows once something is written on spandex, it’s pretty much inarguable.

For those people who missed the show, here’s a closer look at Rey’s eye coming out at the end of the match.

Now, I’m no doctor (check resumes, yup, not a doctor) but an eye-popping out of the socket and into someone’s hand would most likely be a much bloodier situation. And the person would likely be in significant pain, shock, trauma, and unable to move.

Rey and his eye were escorted to the back while Seth Rollins vomited over in a corner.

The real star of the match was Rollins’s stomach as the “Monday Night Messiah” lost everything he ate in catering after witnessing, up close, a man having his eye gouged out.

Not only does the lack of dangling eyeball get a zero from me, the fake vomit from Seth Rollins deserves equal ridicule 😂😂 #ExtremeRules pic.twitter.com/EvhAYnU9ny

I’m not completely sure vomiting works with Rollins’s cold, calculating, cult leader-like persona. Rollins’s character is trying to give off the charming serial killer vibe but I’m pretty sure Ted Bundy and people of his kind developed a pretty tough stomach during their prime murder years.

There was little doubt Rollins would go over in the match since Mysterio is working without a WWE contract but fans were interested in how the whole eyeball angle was going to go down.

The “Eye for an Eye” match was the only match from the Performance Center that wasn’t done live. The match was taped earlier in the afternoon and Vince McMahon himself was heavily involved in laying out the match. This explains why Rollins vomited. Vince loves himself a good upchuck.

According to PWInsider,  there was an internal debate about which match should close the show. Ultimately, the WWE championship match between Dolph Ziggler and Drew McIntyre went second to last and the Swamp Fight closed the show.

I’ve tried to go easy on WWE programming last few months and the company scrambles each week to write five or more hours of live television while dealing with Covid-19.

The company is trying to keep the shows and storylines fresh, original, and entertaining but I’m not sure missing eyeballs, vomiting, and cups of piss to the kisser is the way to bring back the casual wrestling fan.