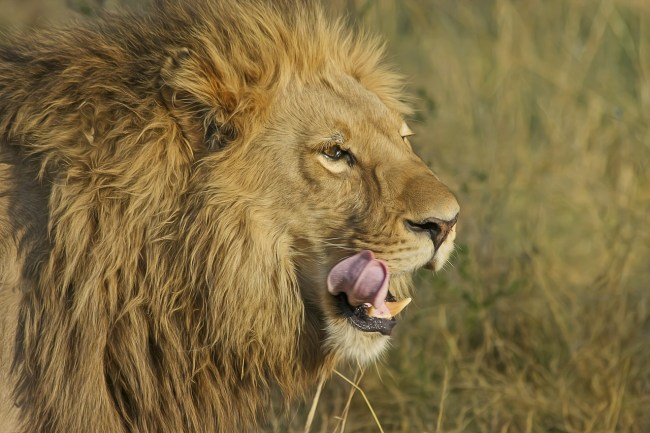 A poacher broke into a national wildlife park with hopes of leaving with a rhino horn. Instead, the man suffered a violent death of being trampled to death by a pack of elephants and then his body was devoured by a pride of lions. The poacher got poached.

We take you to South Africa, where five poachers snuck into the Kruger National Park with the mission of sawing off a horn from an endangered rhino. The group was not successful as the men fled for their life after an elephant stampede. That’s 13,000 pounds of karma stomping on your chest.

Police questioned the four surviving poachers outside of the nature reserve and that is when authorities learned of the gruesome fate of the man. Park rangers went on a search mission to find the man and they found him two days later, but all was remaining was his skull and a pair of pants after the lions ate the human pancake. Teamwork makes the dream work. His body was discovered in an area of the park called Crocodile Bridge. The lions must have been grateful that the elephants tenderized their dinner for them.

“Entering the Kruger illegally and on foot is not wise as it holds very many dangers and this incident is clear evidence of that,” said Glenn Phillips, the Kruger National Park manager. “It was very sad to see the daughters of the deceased man mourning the loss of their father, and worse still, only being able to recover very little of his remains.”

The four poachers were arrested on Wednesday by the South African Police Service. No word on whether the rhino and lions took a selfie with their trophy kill.

The Kruger National Park is South Africa’s biggest nature reserve and has over 12,000 square miles of natural habitat for rhinoceroses, elephants, buffalos, lions and other animals.

There is an international ban on rhino horns, which makes them even more hard to come by and more desired. People will pay big bucks for rhino horns because they believe they cure cancer or fix erectile dysfunction. Narrator: They don’t. Rhino horns are basically the same substance found in human fingernails.