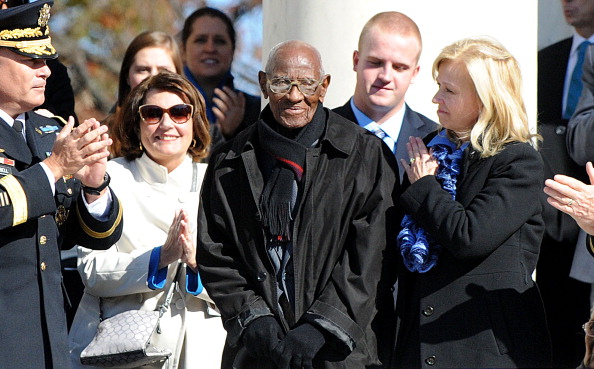 We lost a great one on Thursday. Richard Overton, who was America’s oldest World War II veteran and believed to be the oldest living man in the United States, passed away. Overton, who credited his credited his longevity to cigars and whiskey, has died at the age of 112. He is a national treasure.

We take you back to December 7, 1941, the Imperial Japanese Navy Air Service executed a lethal sneak attack of U.S. military forces at Pearl Harbor. Richard Overton was there and survived the deadly assault that killed 2,335 Americans and wounded 1,143. Seeing his friends and brothers-in-arms killed and maimed didn’t scare away Richard, it pushed him to take the battle to the enemy.

Overton, who volunteered for the Army in his 30s, served in the U.S. Army and was deployed to the South Pacific from 1940 through the end of the war in 1945. Overton’s service in the all-black 1887th Engineer Aviation Battalion took him to Hawaii, Guam, Palau, and Iwo Jima. “You heard in Iwo Jima the water turned to blood? Well, it did,” Richard said in 2013. “When you’re talking about some of the stuff we had to go through, I never want to go through that again.”

Richard Overton, the country's oldest WWII veteran, has died at the age of 112.

The man loved America, whiskey, cigars and guns. Thank you for your service. pic.twitter.com/BVCq5esIYG

In 2013, Overton told the Austin American-Statesman that he had landed on more beaches under fire than he could remember. He also remembered ducking bullets in foxholes and clearing bodies from fields of battle.

“He was there at Pearl Harbor, when the battleships were still smoldering,” President Barack Obama said of Overton in 2013 while honoring Overton during a Veterans Day ceremony at Arlington National Cemetery. “He was there at Okinawa. He was there at Iwo Jima, where he said, ‘I only got out of there by the grace of God.'”

Texas Gov. Greg Abbott called Overton “an American icon and Texas legend.” “With his quick wit and kind spirit he touched the lives of so many, and I am deeply honored to have known him,” Abbott said of Overton. “Richard Overton made us proud to be Texans and proud to be Americans. We can never repay Richard Overton for his service to our nation and for his lasting impact on the Lone Star State.”

Overton received notoriety later in his life for saying that the secret to his long life was smoking cigars and drinking whiskey.

Not only did Richard love cigars and whiskey, but he loved guns. Here he is displaying his gun collection.

Let's take a moment to thank and celebrate the life of Richard Overton the nation's oldest living veteran whose passed away this evening at age 112.
Thank you for your service, sir. pic.twitter.com/NxEs3k6EIJ

This video gives you some insight into the tremendous character of Richard Overton and how fiercely independent he was at 109-years-old, refusing to let anyone drive him around and taking his driving test. At 109 he would still drive widows in his neighborhood to church every Sunday.

The Army veteran lived in Austin, Texas, where he previously worked at local furniture stores and at the Texas Department of the Treasury. Overton had been hospitalized with pneumonia but was released on Christmas Eve. Richard Overton was born in 1906 near Austin and died on Thursday evening at a rehab facility in Austin. Overton outlived his wife, his ex-wife, his six sisters, and three brothers. Richard never had kids.

Have a cigar and whiskey in remembrance of the great American hero that is Richard Overton.

Richard Overton has died at age 112. He was the oldest living World War II veteran in the United States. A real American hero for us to celebrate. pic.twitter.com/4xlH1bUl9h