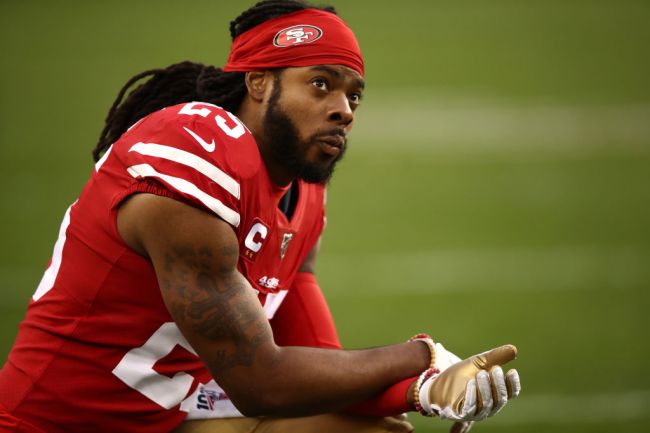 We now have video of the domestic incident that got Richard Sherman arrested.

On Wednesday night, an allegedly intoxicated Sherman was arrested after he reportedly tried to break into his in-laws home.

Free-agent cornerback Richard Sherman is facing several charges, including one for burglary domestic violence, after he was arrested at his wife’s parents’ residence in Redmond, Washington early Wednesday.

Sherman suffered minor lacerations to his lower leg and ankle and was treated at a local hospital as a result of contact from a police dog, which was used in his apprehension, Lowe said. An officer at the scene also received minor injuries, he said.

Surveillance video of Sherman trying to break down his in-laws’ door has surfaced and it’s pretty scary. In the video Sherman could be seen repeatedly slamming his body against the door, calling his father-in-law Raymond Moss a “bitch” and telling him to “come through” while people inside the house could be heard yelling in horror as to what was going down.

According to police, Moss pepper-sprayed Sherman and even picked up his gun because of how afraid he was of the NFL player.

It was not immediately clear why Sherman, 33, was trying to enter the home but his father-in-law told Redmond police that he pepper-sprayed the athlete and picked up his gun during the incident. It appears as if people inside were screaming during the incident.

A King County judge ordered Sherman to be released on his own recognizance after the athlete sat in jail for nearly two days.

Sherman was released from jail without bai after his arrest l but with conditions. Sherman can’t possess firearms, use drugs or alcohol, until he returns to court and is currently under a no-contact order with his father-in-law.