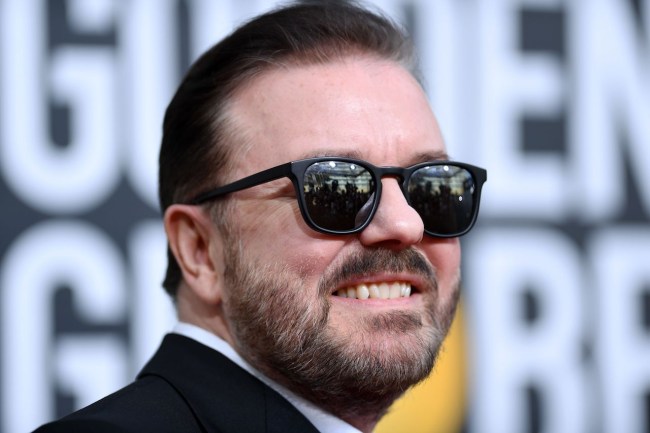 Known as the “fun” Hollywood awards show — given its general laid-back nature and reputation for being a party atmosphere (aka everyone gets drunk at their tables) — the Golden Globes certainly didn’t disappoint in its opening minutes this year, as seemingly reluctant returning host Ricky Gervais absolutely roasted the entire room with his typical brand of biting comedy during his no-holds-barred opening monologue.

Given the current political and societal climate of today’s world, Gervais’ 2020 opening monologue maybe his sharpest yet, as he dropped jokes about Jeffrey Epstein’s “suicide”, called out Apple’s sweatshops, and told the stars in the room to essentially shut up, thank their agents, keep their “political speeches” to themselves, and just accept their award and move on with it.

Ricky Gervais this is amazing!!! pic.twitter.com/kHaREm1rOG

Gervais’ opening monologue obviously wasn’t a smashing hit with everyone in the room, as American national treasure Tom Hanks looked visibly uncomfortable as the Emmy Award-winning comedian torched the room.

This obviously isn’t Gervais’ first time hosting the Golden Globes, as the creator of The Office also previously hosted the ceremony in 2010, 2011, 2012, and 2016. During his remarks, Gervais mentioned that this will be his last time hosting the show, so it should come as no surprise that he’s holding absolutely nothing back.

To their credit, NBC totally knows what they’re doing by employing Gervais in this specific role, as his brash don’t-give-a-fuck hosting style is always guaranteed to generate headlines. Plus, it certainly makes for a more entertaining show, as the Golden Globes are nowhere near as prestigious as the Academy Awards.

You can check out Gervais’ full 7-minute-long monologue below: