Ricky Gervais’ New Special Has Been On Netflix For Mere Hours, Is Already Pissing Off Tons Of People Due To LGBTQ Jokes 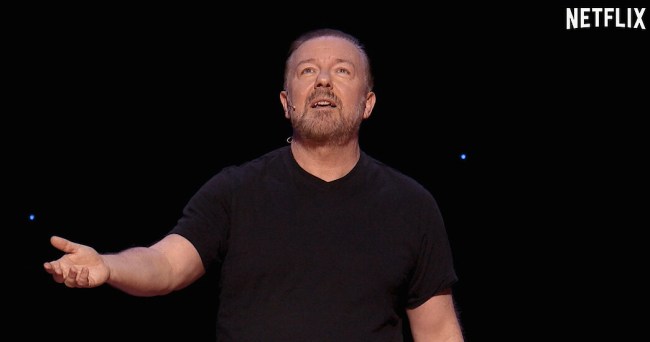 While Ricky Gervais’ new Netflix comedy special SuperNature has only been on the streaming service for a few hours, it’s already been long enough that some people are taking issue with Gervais’ jokes about the LGBTQ+ community, particularly trans people.

Relatively early in his latest special, Gervais — who famously created the original U.K. version of The Office — begins his joke about the trans community.

“Oh, women! Not all women, I mean the old-fashioned ones. The old-fashioned women, the ones with wombs. Those f—ing dinosaurs. I love the new women. They’re great, aren’t they? The new ones we’ve been seeing lately. The ones with beards and c—s,” Gervais says.

“They’re as good as gold, I love them. And now the old-fashioned ones say, ‘Oh, they want to use our toilets.’ ‘Why shouldn’t they use your toilets?’ ‘For ladies!’ ‘They are ladies — look at their pronouns! What about this person isn’t a lady?’ ‘Well, his penis.’ ‘Her penis, you f—ing bigot!’ ‘What if he rapes me?’ ‘What if she rapes you, you f—ing TERF whore?’”

🤣🤣 All hell is about to break lose. pic.twitter.com/grozKb6Rip

TERF, which is a phrase that has been associated with Harry Potter creator J.K. Rowling, stands for Trans-Exclusionary Radical Feminist and represents people who don’t believe that trans women are women.

At the end of SuperNature, Gervais clarified that he does claim to support the rights of trans people:

“Full disclosure: In real life of course I support trans rights,” Gervais says. “I support all human rights, and trans rights are human rights. Live your best life. Use your preferred pronouns. Be the gender that you feel you are. But meet me halfway, ladies. Lose the c–k. That’s all I’m saying.”

The backlash to Gervais’ special is similar to that of Dave Chappelle, who saw the release of his 2021 special The Closer result in people calling for Netflix to remove him and his work from the streaming service. Netflix ultimately stood by Chappelle and his right to “artistic expression.”

Ricky Gervais has a new stand up show out on Netflix today.

5 minutes in and he’s making jokes about trans women attacking & raping people in public bathrooms. To him we exist only as a punchline, a threat, something less than human.

I've always thought Dave Chapelle's trans jokes were pretty mild and disappointingly safe, despite all the outrage over them. But Gervais really goes for it here. This is what we need to see. Awesome stuff. https://t.co/QU8Z6McZ5A

Ricky Gervais may need this. pic.twitter.com/hqWFjYSjYh

it's insane that Ricky Gervais' whole bit is screeching and cackling at marginalized groups being brutally murdered daily, before turning to the camera, making a sad face, and saying "some people put lip stick on bunnies 😥"

Ricky Gervais has a new comedy special coming out Tuesday.

Word is that Netflix sat on it for months because of how virulently transphobic it is—worse than Chappelle—but are releasing it anyway for fear of right-wing backlash.

Never forget that Ricky Gervais blocked all the trans accounts before his special came out. Take that as you will.

Ricky Gervais is just an incredibly lazy comedian who hasn't worked out that just because you're offensive it doesn't mean you're funny.
His fans now seem to consist of right wing twats who think cruelty is funny simply by virtue of it being cruel and "triggering the libs". https://t.co/KG2RdDkL2K

The Independent classes Ricky Gervais: SuperNature as transphobic and gives it a 2 star rating.

Which means it’s definitely worth a watch.

Ricky Gervais is like a dick, he shows up on your phone unwanted, acts big and hard talking about trans people but is way smaller in real life and can't handle getting bent by people calling him out on social media.

I see Ricky Gervais is standing up for the IDGAF+ community.

ricky gervais' sucks not just cause his special is transphobic but also cause he's a coward who's riding a global wave of transphobia to beg real comedians for respect, which he will ultimately not get